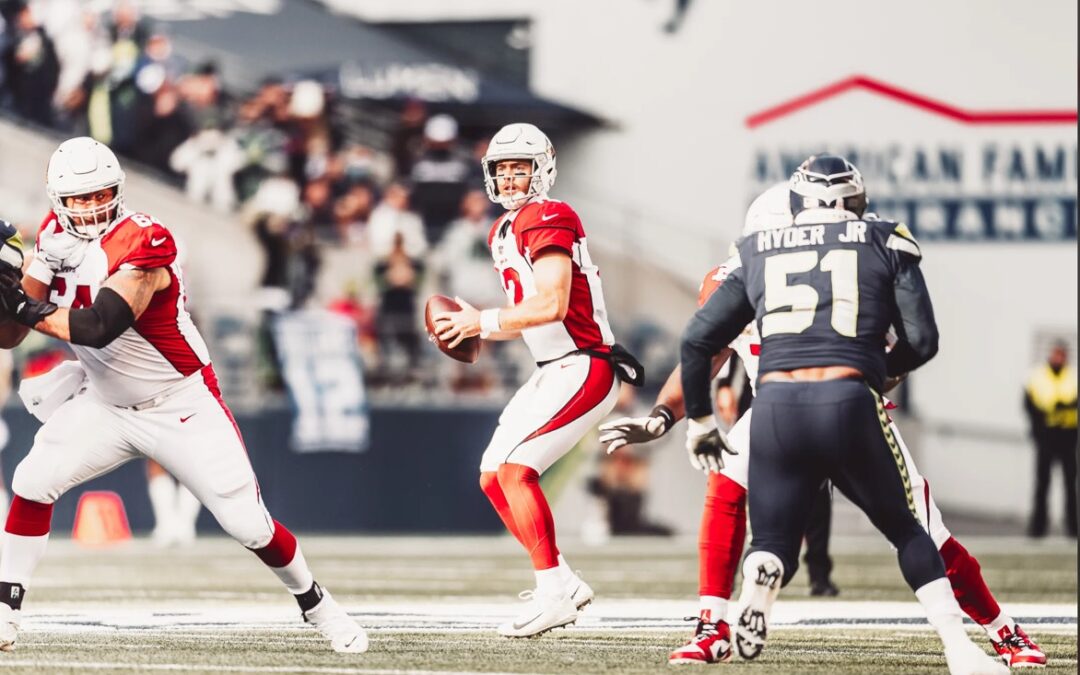 A decade of blue moons and sad-sack quarterbacks ago, an earlier version of the New Browns football hierarchy had begun to cut the legs out from under a quarterback that its deep thinkers had thought not two years before might be able to lead the team to the promised land. But, Colt McCoy—a real pistol of a Texan and the real McCoy son of a football coach—already was being deemed unworthy.

“I’m not ready to anoint Colt yet,” pronounced then Cleveland team president Mike Holmgren after only McCoy’s second season—and first and last as fulltime starter.

McCoy’s doppelgänger, Baker Mayfield, is like Colt, a comparatively shorter Texas quarterback. He had the good sense to get himself north of the Red River to play his college ball to cheers at Oklahoma. He might tell you that unworthy sounds a lot like what came from a watered-down mob at FirstEnergy Stadium on an ugly Sunday.

The boos that washed over Mayfield seemed to affect his growing maturity and credible responses to even those days when bad things happen to good-when-healthy quarterbacks. For the first time in his four Browns seasons, Mayfield stiffed the media; he explained the following day that it was not because he feared facing the music with print and electronic journalists no more understanding or kinder than critics in the stadium’s not-so-cheap seats. He knew the media might have booed as well, if members hadn’t sworn not to cheer—including the Bronx variety—in press settings.

“I’ve never dodged any questions,” Mayfield said. “I’d be the first to tell you I played like s—.” He told his teammates and coaches as much, because they are the only ones to whom Mayfield believes he owes accountability and explanations. (The NFL would beg to differ, reminding him that he is required to meet the media after games, good or bad.)

Actually, his statistical performance (15 of 29 for 51.7 percent, 176 yards, 1 TD, 2 INT, 53.2 rating) in the Browns’ 13-10 victory over the hapless, winless but-not-tieless Detroit Lions said it all. Mayfield’s passes floated about in such a willy-nilly fashion for most of the wet afternoon that they looked like misguided drones operated from the safety of some far-away bunker. It was not the first time in 2021. Mayfield has had three passer ratings in the 50s—an “F”—and the 53.2 was second lowest of his career.

The banged-up Mayfield does not have the drone “pilot” luxury of bombing away from a bunker of a building in a country removed from the battleground. He must have thought he deserved some credit for playing hurt (left shoulder, right knee, sore left foot that was stomped again), which, though no doubt well-intended, actually hurt his team.

He had prepared well, practiced well, made good game decisions where to throw the ball and then too often threw it badly: “That’s very, very frustrating. I’ve always been an accurate guy.” That is what hurt most—not the crowd’s boos. “Those are probably the same fans who won’t be quiet while we’re on offense and trying to operate. So don’t really care.”

If Mayfield felt abused, he should talk with McCoy about his time in Cleveland (and he may have). Though it may not feel this way to the no-longer-so-young Colt but an injury he experienced here did not come entirely at the hands of Pittsburgh linebacker James Harrison, who learned how to smack down quarterbacks and other opposing players in the worst—some think it the best—way possible. The hit that Harrison put on McCoy all but sealed Colt’s fate. He never had a chance afterward to prove how good he could be.

If it did not alter McCoy’s career path, it ultimately changed the NFL. The hit resulted in the stricter concussion protocols now followed. The Browns training and medical personnel, busy attending to other players, did not see Harrison’s violent helmet-to-facemask hit on McCoy that sent him to the sideline during a December 8, 2011 game but back onto the field two plays later; coach Pat Shumur said he also had not seen the hit at Pittsburgh’s Heinz Field. After a swift but extensive review result in no punishment for the Browns, the NFL required, before the end of the month, that teams hire independent, league-paid athletic trainers. Positioned in upstairs booths with access to video replays and direct communication to team medical staffs and trainers to provide information and to help these medical personnel determine appropriate evaluation and treatment. McCoy was not so much as sideline-tested for concussion.

Though he recovered, McCoy missed the final three games of the 2011 season, and the team began to look for another quarterback to replace the two-time, consensus All-American and Walter Camp Player of the Year at the University of Texas where he had a 45-3 record. They found Brandon Weeden, another sterling Big 12 Conference quarterback, from Oklahoma State, turned the team over to him, and traded McCoy to the 49ers. Weeden lasted in Cleveland a year less (2) than McCoy but does hold the distinction of being the only NFL  player that I know of to be attacked by an American flag. Weeden, before his first game, became trapped beneath the field-size flag but survived to throw four interceptions in an unsettling debut loss as Browns quarterback.

McCoy should have known—and what must Mayfield be thinking now—that his days were numbered before the lights went out. Coaches and front-office personnel, through Browns writers, used words/phrases/metaphors that planted seeds of doubt. Mayfield also has heard them and they are practically the same that pelted McCoy a decade ago. Here are only a few:

The seeds signaled that McCoy’s career was about to come a cropper.

Cleveland may have been the first to consign McCoy to backup quarterback but he has distinguished himself as among the better, most reliable in the NFL. At 35, he has subbed for Kyler Murray, Mayfield’s successor at OU, in the past three Arizona games and won divisional tests by double digits at San Francisco and Seattle. The guy not good enough for Cleveland completed 81 percent of his passes without an interception.

Given the New Browns history with quarterbacks, Mayfield’s struggles may be more of surprise to him than they are to those who have had no shortage of opportunities to boo since the team was reborn in 1999. Like McCoy, Mayfield climbed to the mountaintop of the college game before discovering that even a Heisman Trophy winner and No. 1 pick in the draft can find professional success as a Browns QB a slippery slope. It will be better for all concerned if Mayfield can regain his health and the team the equilibrium that it showed on a rare run of success to and in the 2020 NFL Playoffs. Otherwise …

. . . Not sure the fiery Baker Mayfield could endure, as Colt McCoy has, making a long NFL career for himself—now 11 years—as a second banana who deserved better.