Mayfield Memorandum 21: This is Leadership? 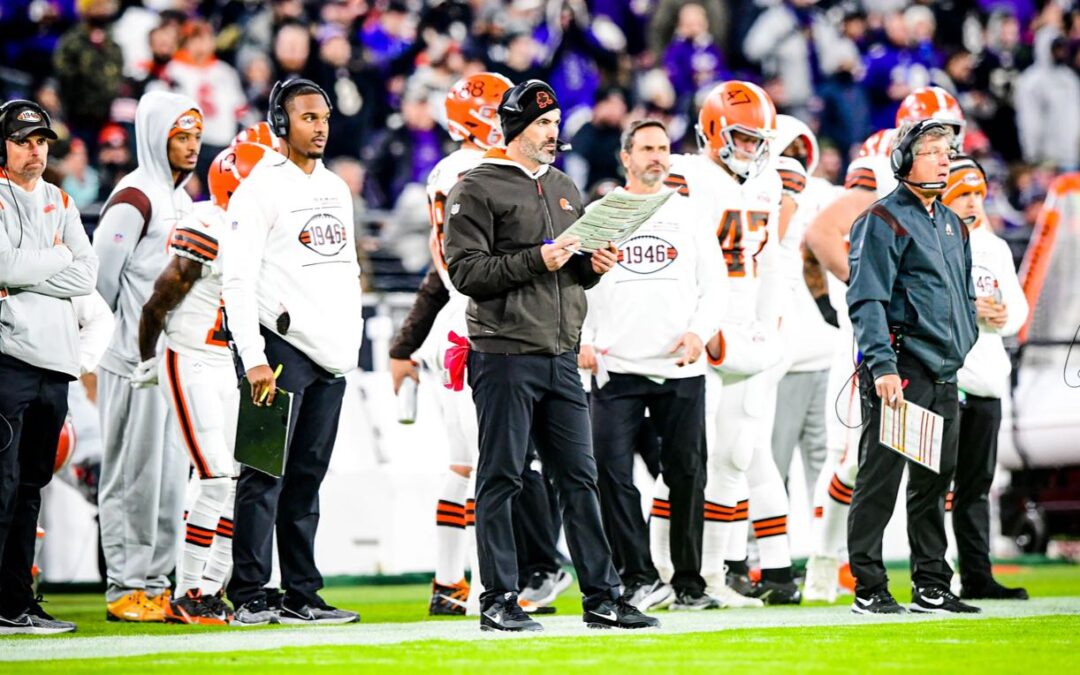 That Kevin Stefanski is downright Churchillian when it comes to demonstrating leadership. Before his team’s latest debacle, a 16-10 loss to the Baltimore Ravens, ESPN reporter Sal Paolantonio reported that he had asked the Cleveland Browns coach what he expected from quarterback Baker Mayfield in this critical game of its season.

Ever the wit, Stefanski reportedly told Paolantonio that he advised Mayfield to: 1) Take care of the football, and 2) Lead us on the field, on the sidelines, and, he might well have added, being the great student of leadership that he is, something from Winston Churchill’s first speech to the House of Commons after he had been chosen to lead and save Great Britain—and with it the world—during World War II. Churchill concluded his short-but-guiding speech with an even briefer, smarter stunner on policy and aim:

“I can answer in one word: It is victory, victory at all costs., victory in spite of all terror, victory, however long and hard the road may be; for without victory, there is no survival.”

A less ominous but athletically consequential view of conflict might be: The Browns, without victory over the Ravens, whom they must meet again in a fortnight on Cleveland’s own FirstEnergy battlefield, probably would be toast. Did Churchill leave it to his field commanders to lead and inspire the troops. No sir. He jumped in himself.

With bombs bursting in air, Churchill led with actions even louder than his words. And what did Mr. Stefanski do? He consulted his play sheet, on which he found no answers and thus his offense played like National Football League’s Little Team that Couldn’t.

The list could go on and on but such overkill seems unnecessary since the 6-6 Browns’ ambition of repeating last season’s playoff appearance, much less victory, is as dead as the great minds who passed not only on Jackson—a previous administration—but also the current staff who preferred Stefanski to Josh McDaniel, the New England offensive coordinator who, with a little help from some cranky old man who used to coach the Browns, has breathed new life into the team that lost Tom Brady, GOAT quarterback.

When Stefanski met in the late/wee hours with the media, someone asked if during the bye week between unusual back-to-back games against the same opponent, he might consider starting another pitcher—in this case, Case Keenum—in Game 2 of night-day Ravens doubleheader. He may not have liked the question because when the person followed up by challenging him—“Why not?”—Stefanski had a question of his own: “Let me ask you a question,” he said. “Why would we do that?” Then, “We’re not doing that.”

The question’s timing did seem off, because if Stefanski had wanted to replace Mayfield for an extended period—Keenum filled in for QB1 in the 13-10 victory over Denver—the time to have done so would have been as Mayfield’s injuries—shoulder, foot, knee, and who knows what else—mounted. Stefanski stood pat. Inaction, stubbornness, or stick-to-it-tiveness—take your choice—seem to be his first choices and fallbacks. Though the offense, guided by his play-calling, resembles a drowning man thrashing, he has so far resisted the idea of turning over play-calling to offensive coordinator Alex Van Pelt.

How much worse could Van Pelt do? He called the plays during the Browns victory over the Steelers in last season’s playoffs after COVID-19 sidelined Stefanski in his basement. When he returned, the Browns lost in the next round to Kansas City. It is difficult to envision a more slapstick offensive performance than that which occurred in the final minutes of the Browns and Ravens’ first half when they played a game that could only be described as: Here-You-Take It/No-You-Take-It. A person might have thought The Three Stooges, an old vaudeville/comedy team, had snuck into the game.

If at various times Lamar Jackson and Baker Mayfield resembled Moe and Larry, surely the man on the Browns sideline had to be Curly, his play-sheet riddled with holes. Curly was considered the most popular Stooge, so if Stefanski keeps calling plays as he has been in this season of his and the offense’s decline, he could at least consider comedy.

Already national critics have noticed the (not-so) funny stuff going on with the Browns, and have removed them from their lists of possible playoff teams. Peter King announced this week’s FMIA blog would not “give the normal attention” to “Baker Mayfield and the crashing-to-earth 6-6 Browns.” Before the season and insult (Beckham) was added to injury (Mayfield), kind optimists had considered the up-and-coming Browns a candidate to reach their first Super Bowl. No more. With only five games remaining—three against the AFC North’s Baltimore, Pittsburgh, and Cincinnati and two with playoff sure-thing Green Bay and contender Las Vegas—a string of playoff-producing victories may not be impossible but is more improbable than likely.

ESPN’s Kevin Seifert’s Week 12 Playoff Picture reduces the Browns to barely his last team “In the AFC Hunt,” behind even the flailing Steelers. “The Browns,” he concludes, “had a golden opportunity to get back into the playoff picture” with a win. “They would have finished Week 12 in the No. 7 spot if they had won.” (Seven AFC teams will qualify: 8-3 Baltimore is No. 1; 7-4 Cincinnati is No. 5.) “Instead, with losses in two of [its] past three games . . . FPI [Football Power Index] gives Cleveland a 19% chance of playing postseason football this season.” If players deserve blame so does Kevin Stefanski whose play calling, team management, and leadership should be in question.