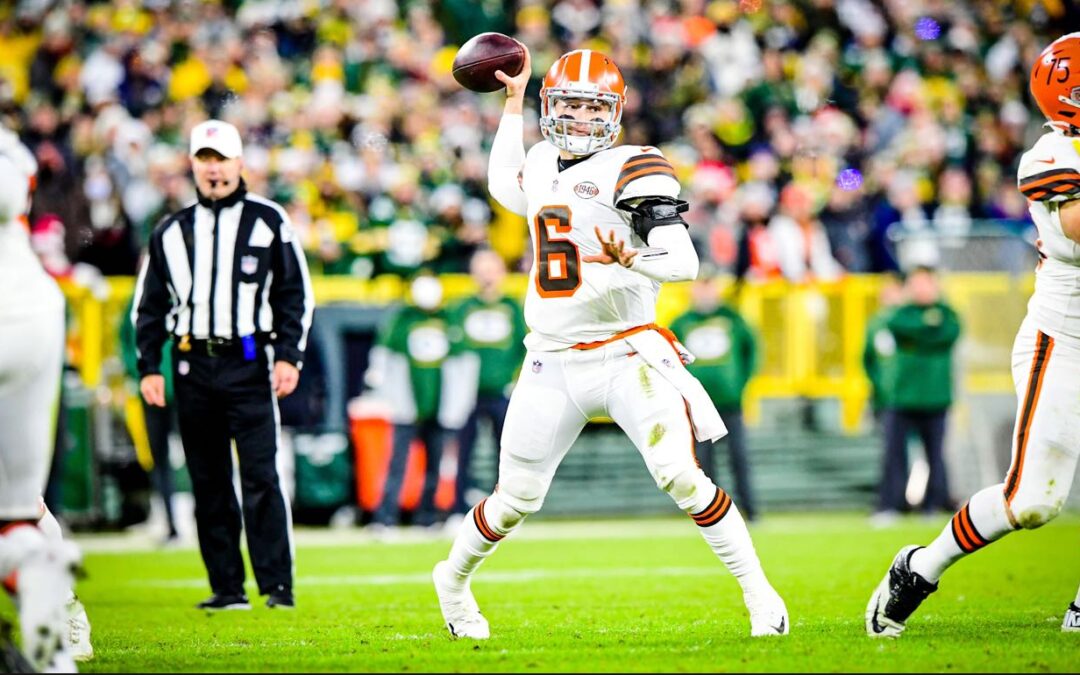 The cosmic disconnect between the games of football that two quarterbacks—Baker Mayfield and Aaron Rodgers—played could not have been more extraordinary. On Christmas Day, it became such a physical presence that it could not be ignored. And, of course, national TV bore witness to Rodgers at his zenith and Mayfield at his nadir.

On the scoreboard at Green Bay’s legendary Lambeau Field, Rodgers’ team, the Packers, flashed a video of another quarterback who has been an important part of Rodgers’ and Mayfield’s lives. Brett Favre had come via our electronically connected world to praise Rodgers, his one-time understudy, and also to make a demand.

Rodgers had just thrown his 443rd touchdown pass (for the record book, to Allen Lazard), which broke Favre’s mark. After an extra point kick—something Cleveland’s first-time, substitute placekicker Chris Naggar had botched earlier—Green Bay had a lead, 7-6, and, in no small part because of Mayfield failures, would never relinquish it.

No one knew any of this at this point. If they had, Mayfield surely would have felt sick to his stomach. As a boy quarterback in Texas, he had idolized Favre, who most agree had played the position like an Old West gunslinger. He loved shootouts. Win or die. He won more than he lost, enough to earn a bust in the Pro Football Hall of Fame. Rodgers plays differently, a little more carefully, but will no doubt end up in the Hall in Canton. He probably thought he should not have had to wait behind Favre for three years, but even though the Packers did move on from Favre before he was ready to mosey, Favre was and always will be a legend in the smallest city in the National Football League, a place respectfully referred to as Titletown USA, as much for its championships under Coach Vince Lombardi as for today’s entertainment district there.

So after Favre congratulated Rodgers, who is in his 17th season, on breaking the TD- pass record, Favre had a request that sounded more like a demand of what he expected from his successor: “Go get us another Super Bowl.” Enough is never enough.

The Browns, who won their championships before they were commercialized into Super Bowls, have never been to one, much less won the championship. Mayfield convinced former team management in 2018—therein lies one problem, churn—that he could become the quarterback to change that. He was the No. 1 pick in that draft and though he has had his moments, there have been too many like the four interceptions that allowed Rodgers to follow the first three with—you guessed it—touchdown passes, and the fourth to end a final, last-minute push toward a field goal or TD to avert a 24-22 loss.

He could have said: I killed this team. He had plenty of accomplices, as is usually the case, and not the least of them was Coach Kevin Stefanski, who continues to create incomprehensible game plans that he fuels with bad play-calling. It may be nice to show faith in his quarterback, something the commentariat increasingly does not do, but to launch an air assault on Green Bay when you have one of the better, if not the best, running attacks in the NFL and your quarterback is still recovering from a series of injuries and just spent 10 days away from the team in Covid Reserve quarantine, borders on negligence, which Stefanski either cannot or is unwilling to recognize.

Though Mayfield started sharp enough in the short-passing game, Stefanski’s early emphasis—18 first-half passes to 9 runs, and only 5 by Pro Bowler Nick Chubb—dug a hole that even Chubb could not dig them out of, given the consequences of Mayfield’s repeated interceptions. Two of the four resulted from poor decisions and/or bad throws but two others included bad luck—Jarvis Landry slipped and was on the ground when a defender stepped into the path of the ball—and officiating that did not detect a defender holding Donovan Peoples-Jones. It had Covid Reserve players coaching from home.

Safety John Johnson live-tweeted as he watched on television: RUN THE DAMN BALL. Good idea but when they finally did it proved too little, too late, despite Chubb’s heroic effort: 12 carries for 89 yards in the second half to push his totals to 17 for 126 yards and one TD. “To be in a 2-point game when we didn’t do a great job with the ball is unfortunate,” Stefanski said. Well, yes. But it was not surprising.

Though it was Mayfield’s first 4-interception game he has been prone to interceptions—six games of three interceptions or more in his four seasons. The Browns this season also have been too penalty prone and too undisciplined to achieve what Mayfield’s final interception prevented—at least an attempt by the rookie kicker at a field goal. The Browns have lost six games by six or fewer points, including two in a row by two points.

When the quarterback plays poorly, the pressure cooker’s lid rattles loudest, and it is unlikely his team will look like and do what Rodgers’ play allows the 12-3 Packers to do. This time he did not have to because his Browns counterpart threw the ball to so many players in green jerseys and yellow helmets rather than Cleveland’s white and orange. COVID-19 has been reported to cause loss of taste and smell. It makes one wonder if the virus also affects another sense, eyesight—not to mention coaching common sense.

In any case, if the Browns have found it difficult to impossible to beat teams in crunch time of games, they had better buckle up and hang on tight because the final two weeks of the season—at Pittsburgh on Monday night, January 3, and at home against Cincinnati on January 9—are going to be one long lid-rattler. Lose and no consecutive playoffs since 1988 and 1989, when Bernie Kosar quarterbacked the Old Browns to five playoffs in succession, two ending in the AFC Championship Game with losses to John Elway and his Denver Broncos. Now, because of Stefanski’s play-calling and Mayfield’s execution, even two wins won’t guarantee the playoffs. Those will depend on what other playoff contenders do. The permutations give me a headache, much as these 7-8 Browns themselves have done for weeks on end.

Even with a good and tall quarterback (Bernie Kosar, the clunky Tin Man), the late Marty Schottenheimer knew enough to run the ball. Of course, that can lead to its own trouble and heartache. Remember The Fumble? Doesn’t seem quite so bad now.