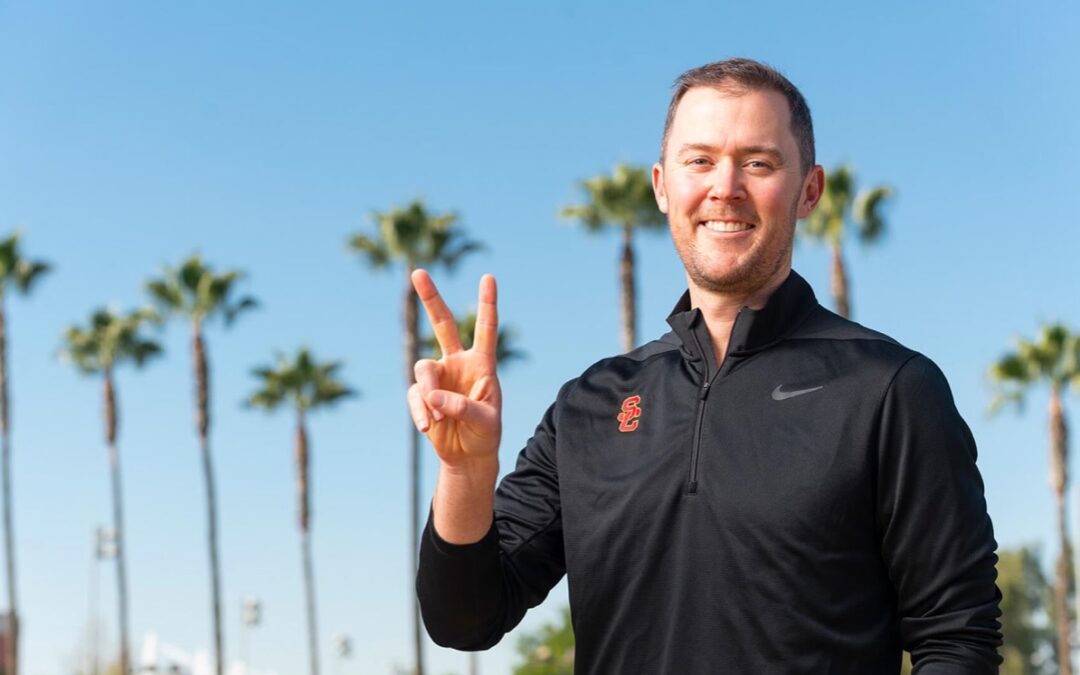 Before he unceremoniously dumped the Oklahoma Sooners for USC and the lure of LaLa Land, Lincoln Riley had become known as a Quarterback Whisperer. Usually if a person works in Oklahoma, he is more likely to be known as a Horse Whisper. In a sense, Riley was. He rounded up QBs, near and far, especially transfers. It was as if he had carrots up his sleeve—Heisman and readiness NFL—and the QBs bit on them.

Until Spencer Rattler showed up, early and direct from high school, to break the transfers streak of starters—and Riley’s spell—Riley couldn’t beat ’em off with a stick. He was a Pied Piper with a Midas Touch: Baker Mayfield came from Texas Tech. Kyler Murray from Texas A&M. Jalen Hurts from Alabama. Rattler understudied Hurts in 2019 but because he played in only three games—four is allowed—he was a redshirt freshman when he took over in 2020. Hurts had become the third consecutive Sooner quarterback drafted by an NFL team. Mayfield (Cleveland) and Murray (Arizona) had been first picks in the 2018 and 2019 drafts after winning the Heisman Trophy.

Hurts finished second to Joe Burrow in the Heisman voting in 2019—OU’s fourth finalist in five years, with Mayfield second to Lamar Jackson in 2016 before winning in 2017. Hurts was not drafted as high as Mayfield and Murray because his arm was not as good as his legs. Philadelphia took him with the 53rd choice in Round Two of the 2020 draft.

During the past weekend of an enlarged NFL Playoffs Wild Card round, the two former OU quarterbacks still standing—Hurts and Murray—were, to put it gently, handed their heads. Mayfield missed a second straight playoffs and is twisting in the wind despite the fact his team claims that it expects him to be its quarterback for 2022. He had so many medical problems in 2021 that his agent should have attempted to place him on Grey’s Anatomy, television’s currently longest-running medical drama. He’s a natural actor.

The question is: Can he quarterback in the NFL? Of course, it’s a spurious one. For the entire existence of theNew Browns—1999 to present—it has had such a bad run of QBs and decisions regarding the position that it should be dancing on the 50-yard line every time one makes it to the second quarter, much less to a rich fifth-year option. Throughout the NFL, many anonymous mouths spew doubt all over that proposition.

Mayfield should be kicking back at the Heisman House in Fansville, counting his blessings and drinking a Dr. Pepper. Instead, he has gone from so many trips to the blue sideline medical tent this past season that they named it after him to going under the knife today in California to repair the first in his series of injuries, a torn labrum. On the surface, his season ended worse than those of his friend-and-immediate-successor Kyler Murray and that of Hurts, successor once removed, and theirs were painful.

In the first of the 2022 Playoff games involving Lincoln Riley’s transfer transformations—especially Hurts—Jalen showed the same character he had demonstrated when Tua Tagovailoa took his job at Alabama. He hung around to help win (especially) a Southeastern Conference championship and a national title before heading for Oklahoma and Riley to improve his passing game and to help prepare him for the NFL.

It turns out, given results, that even the Quarterback Whisperer may be deaf and blind to what it takes to succeed in the NFL, the league that had been licking its chops to convince Riley to bring his magic to Big-Boy-Pants football. USC got to him first, pot of gold overflowing. Though I am not as angry with ingrate Riley for hitting the road from Norman, Oklahoma to LA as are the Sooner faithful who still live in the Red Dirt State, I prefer his successor, Brent Venables, once OU defensive coordinator (then Clemson’s). Venables seems to love Oklahoma and its people more than Riley does opportunism.

To be fair, Riley’s job was to win games at Oklahoma, which he did, not to polish Mayfield, Murray, and Hurts to such a high gloss that they would remember their old ball coach once they hit the MegaMillion NFL Quarterback Jackpot. Anyone who followed Oklahoma with at least one eye wide open knew that all three of these excellent college quarterbacks labored with deficiencies that would be a challenge to overcome in the NFL. If a person were to handicap them for their ability to succeed in the NFL, Murray would rank first, despite being the shortest (5-foot-11?) of the three but with strong arm and lickety-split moves, Mayfield second because he is such a fighter that he could knock out Mike Tyson in his prime and bite off his ear and spit it out—yuk—and Hurt third because he is taller than Mayfield, runs much better, but still can’t quite pass.

Anyone who thinks that Hurts can throw did not watch his playoff effort against Tampa Bay. A person would have thought he was the 44-year-old QB, not Tom Brady. Ten years after Brady retires and 20 years after he dies, he will still be a better passer than Hurts. If that sounds like an exaggeration please see an ophthalmologist and ask if they can conduct a laying on of hands and make you see. Here’s the kicker, though: Kyler Murray looked worse than Hurts. I would never have believed I would write those words. Murray, as the broadcast crew politely pointed out, panicked as if his pants were on fire. He made horrendous mistakes—SHORTEST PICK-SIX IN PLAYOFF HISTORY—and seemed as if his brain shut down because he could not bear the mess he was making.

Rattler experienced something similar this past season. Like Mayfield now, he regressed. He became careless with the ball and Riley’s usually jaunty offense staggered. Because he is the Quarterback Magnet, Riley had freshman Caleb Williams waiting in the wings. Like magic Williams made deficit disappear and Texas with it, and next thing a person knew it was Williams’ name on everyone’s lips. Then an unfortunate series of not-so-funny-incidents occurred: OU lost two late-season games and didn’t win the Big 12 Conference for the first time in Riley’s five years as head coach. One day after the final loss (to Oklahoma State, no less) Riley blew out of Norman so fast that the red dust didn’t even have a chance to settle on him but his image was dirtied a bit.

He did what Mayfield, his and OU’s best QB ever, does not yet want to do—flee for greener pastures. What Spencer Rattler already has done in a transfer to South Carolina and what Caleb Williams is contemplating, having entered college’s Transfer Portal. Coming off his worst pro season—one filled with doubts caused by injuries and mistakes—Mayfield wants to stay and redeem himself. He told Cleveland and Northeast Ohio he wanted to come here and make things better. He has—just not good enough to satisfy those whose desire to win a Super Bowl is as high as Gordon MacRae famously wrote the corn grows in Oklahoma—“as high as an elephant’s eye.”

In Oklahoma almost everyone believed in Riley, in part because they thought he believed in them and Oklahoma football, even if there could be a rough patch ahead when the Sooners, along with Texas, move to the top-loaded Southeastern Conference. Riley seems to think it will be easier to win championships with LaLa Land’s resources. Mayfield wasn’t looking for easy when he came to a place where, as Akron’s favorite son, LeBron James, so aptly put it: “Nothing is given. Everything is earned.”

Mayfield is learning that the hardest time is when the top rung has not yet been earned and the climb is daunting. Maybe the Quarterback Whisperer didn’t fully understand this when he couldn’t easily win a national championship in hardscrabble Oklahoma. He hit the road for smoother going. Will the Browns continue to support Mayfield’s climb, one on which he and they could very well fall short? Isn’t this where people stay the course?