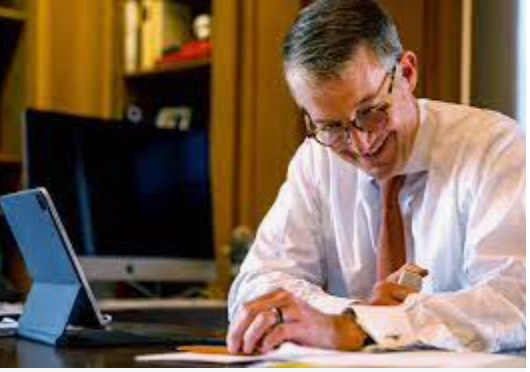 As the red dirt shakes and quakes beneath the Oklahoma heart of the Big 12 Conference, its tremors running from Norman to Austin, Texas, the college athletic universe, in particular football, awaits the playing out of what could be seismic change. An account first in the Houston Chronicle suggested the University of Texas and the University of Oklahoma have been discussing with the Southeastern Conference whether they might join and further extend the SEC’s preeminence.

This is a gut punch to an Oklahoma boy who grew up listening to Sooner games on a radio not quite a console but also not one of those newfangled little portables of the 1950s. It was smaller than a lunchbox but bigger than a breadbox, and it filled the happiest Saturday afternoons I have ever known. The Sooners of the great Bud Wilkinson never lost—or at least it seemed they didn’t. Beginning with the third game of the 1953 season and extending through the first seven games of 1957, they won 47 games in a row, a record that endures. It was Notre Dame, not Texas, that finally beat No. 2-ranked OU 7-0. One of those who will decide whether the Longhorns herd themselves out of the Big 12, with the Sooner Schooner joining the two-team wagon train, no doubt knows this history, as he grew up in Oklahoma.

Jay Hartzell, who plays a critical role in the Texas decision, is president of the university. I could not have predicted the Jay Hartzell I knew when he was a little boy,  the age of my own son, would be in this position. He might have known, though. When Hartzell became president in 2020, Avrel Seale wrote a Hartzell UT profile that began:

“When Jay Hartzell was in high school and his parents asked what he wanted to be, he said, ‘a professional student, because I enjoy that and I’m pretty good at it. If it could pay, that would be a pretty good deal.’ Being a professor was about as close to ‘professional student’ as one can get, he says. ‘Now I’ve screwed it up and have this job where I wear a tie’.”

Sounds like something his father might have said, only when he took an executive position, of sorts, he did didn’t often have to wear a tie and certainly did not favor them. Jay Hartzell is the progeny of Bobbie Gene and Carolyn Hartzell, and I knew Bobbie Gene if for too short a time then well enough for him to see me through a divorce in Tulsa, Oklahoma, and to stand with me as best man the day in 1975 I married Jacquelyn Boucher. It was an affair of the heart. I loved both Jackie and Bobbie Gene.

It was, in fact, a Tulsa Tribune affair. Most of those in a chapel at the University of Tulsa that day were a part of the Tribune family—and that is what it was, a family. It certainly was in Bobbie Gene Hartzell’s sports department, where he served double duty as editor and columnist. I was one of his early hires after his assistant Bill Harper had discovered me in Lawton, Oklahoma, when we happened to end up covering some of the same events. Bobbie Gene had come to Tulsa from the Topeka Capital Journal, where he also had written columns. He was a damned smart good ’ol boy from Camargo, Oklahoma, up around Woodward. So I know where Jay got some of his smarts, cleverness, and likeability. Bobbie Gene became my boss, mentor, and benefactor who named me a columnist to share the load with him because he thought two views were better than one. Most of all, he was my friend, a man I could count on.

Bobbie Gene did not live nearly long enough to see his son become UT president. Throat cancer killed him in 1981 at 43, after a long struggle to overcome it by smiling, not whining. Jay was still a young boy and so I cannot help but wonder what Bobbie Gene would think today about the decision his son faced and what advice he might have had.

By Friday, multiple reports, including from Kirk Bohls at the Austin American-Statesman, were that the culmination of a surreptitious six-month process was nigh and over the objection of Texas A&M, which hoped to remain the only Texas university in the SEC. Texas and Oklahoma would leave the Big 12 for bigger, better, and richer. Much richer.

It can be argued that Texas, which has not been able to find its football footing in recent years in the kinder, gentler Big 12, may be jumping from the frying pan into the fire. And Oklahoma, while higher echelon of any conference, even the SEC, will not be as dominant as it has been for more than 20 years with coaches Bob Stoops and Lincoln Riley—especially offensive genius Riley who has strung together Big 12 championships.

Some financial analysts estimate the benefit from new SEC television rights, with Oklahoma and Texas, willraise ESPN’s annual payout per school from $44 million to $60 million. For Oklahoma and Texas the increasecould be as much as $22 million more per year since they receive less in the Big 12 than SEC schools. No one mentions conference history, tradition, and a forgotten word—“loyalty.”

I have to believe Bobbie Gene Hartzell would take notice of this omission or at least the downplaying of the thing that is not green with $$$ signs all over it. He would understand the economics of running a big-time athletic program, especially in the wake of the financial losses in the 2020 pandemic season, but he would not turn away from loyalty’s value. I am not a good one to address this, because I was not loyal to him.

My decision to leave the Tribune for what I thought was going to be a columnist job at the Miami Herald should be a cautionary tale for others, including his son at Texas and those in charge at Oklahoma. My decision did not work out for me, but Bobbie Gene came out of smelling like the Yellow Rose of Texas. He ended up with Mike Sowell, a better columnist than me, riding shotgun and succeeding him as sports editor.

That was in the late 1970s and early ’80s. Times change, priorities shift, but loyalty still should count for something. Jay Hartzell, of course, is, putting his loyalty to the University of Texas first with the choice to move on from the Big 12. Texas joined what has become the Big 12 after the demise of the Southwest Conference in 1996. The SWC had existed since 1914 and once included Oklahoma schools. Things change.

So now Bobbie Gene Hartzell’s son takes off the tie, rolls up his sleeves, and gets his hands dirty in the sometimes-squalid business of intercollegiate-athletic solvency. I only wish I could read Bobbie Gene’s take on this. At least we’ll soon learn Jay Hartzell’s.