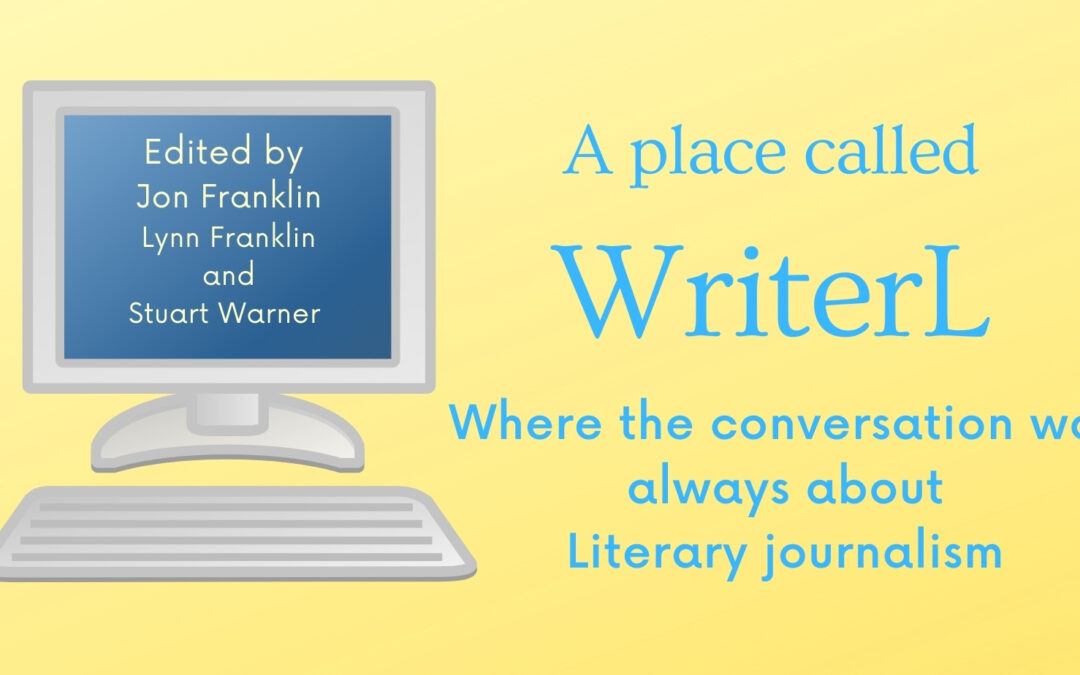 Largely and rightly, Stuart Warner’s new book, A Place Called WriterL: Where the Conversation Was Always About Literary Journalism, celebrates teaching and learning that has elevated narrative nonfiction in the hierarchy of writing. It also reeks of loss.

It could have been titled: Requiem for Writing that Could Have Saved Newspapers.

Jon Franklin, along with wife Lynn, started in 1994 WriterL, a listserve. It brought together on the Internet writers, teachers, and others who yearn to give well-told true stories the punch of fiction and the respect that comes with it. WriterL evoked the promise of nonfiction writing, even in lesser newspapers, and delivered on it.

That’s why Warner proposed to the Franklins that they pull together many colored threads that made WriterL a kaleidoscope of learning and sharing—and, yes, criticism that could be tinged with too much vehemence and too little generosity. Jon Franklin hated the “L” of the listserve’s name, bestowed on it by the techie who created its ethereal manifestation that brought together far-flung writers, teachers, and all manner of word lovers and storytellers. Franklin, two-time Pulitzer Prize winner and author, was one of the magnets. Ultimately, though, it took a community to make WriterL the beacon it became. Warner, with the Franklins, has edited a composite of memorable last words.

Technically, WriterL received last rites in 2009. Even Jon Franklin couldn’t save it, though he tried mightily, and he and Lynn and other writing big names had lured many believers to the mountaintop. After a seeing-the-light experience in 2003 at the first Neiman Narrative Conference for Editors at Harvard (expanded from an original conference for writers), Warner writes in a postscript with WriterL the Book:

“I left believing that literary journalism could save newspapers, as did many of the others. We were wrong.”

Those who count the beans and hold tight to purse strings at newspapers have little understanding of how great storytelling can fatten bottom lines. Similarly, some editors proved resistant. That killed the Neiman Conference and WriterL. Something smaller, elite, and costlier may survive but nothing will raise The Good Ship Journalism from shallow thinking in troubled financial waters. It already had collided with financial icebergs—loss of subscribers, followed by greater losses of advertising, especially the plebeian classifieds that were pure oxygen.

At least we will have WriterL the Book. Its lessons are many and important, and Warner has wrangled the discussions into issues from nonfiction character development to “truthiness” to the esoteric that sound as if they belong in Inside Baseball for Writers.

One of my favorite segments involves a Northeast Ohio writer whose work I know well but not well enough to have understood the extent of Jon Franklin’s influence on “The Burden of Innocence,” a five-day series about Michael Green, wrongly convicted of rape. Even before Warner sought Franklin’s opinion, writer Connie Schultz and Warner had the makings of a compelling story on injustice. They were a good team—Warner supportive but challenging, Schultz a thoughtful writer who pushed herself beyond usual boundaries and obvious questions as she built her knowledge of Green with endless interviews and a physical presence that revealed the real man. Franklin had a thought.

“What you really have here,” he told Warner, “is a story on courage.”

“This man,” Franklin explained, “had the courage not to be bitter after losing all those years of his life. That’s a story I haven’t seen before.”

NOW you tell us? Weeks had passed. The story was due in four days. Warner knew Shultz had recognized the courage when she began reporting the story. But it got lost in all those telling court transcripts that screamed injustice but not courage.

“Suddenly,” Warner wrote in WriterL, “our vision was clear.” So were their minds.

Schultz did a weekend rewrite. The result freed Michael Green after the real rapist turned himself in upon reading Schultz’s series. Schultz followed Green’s not-always-easy reintroduction to life on the “outside.” Jack Hart, who has edited four Pulitzer finalists, served on the Pulitzer committee that chose Schultz’s story as a finalist: “I can absolutely vouch for the fact that it was the story’s vision—the clear point it made about a universal truth—that got the story into the finals.”

Besides being a Pulitzer finalist, Shultz also won the Robert F. Kennedy Award for Social Justice reporting—and became a columnist (now with USA TODAY). Warner was her editor at The Plain Dealer in Cleveland. In 2005, Schultz won the Pulitzer Prize for commentary—and Warner continued to try to help every writer to see the real story.

WriterL the Book does that again and again. Warner should submit it for the Pulitzer Prize for Public Service and—Pulitzer of Pulitzers—Gold Medal. It could hardly do better.

Just don’t expect that to save newspapers.