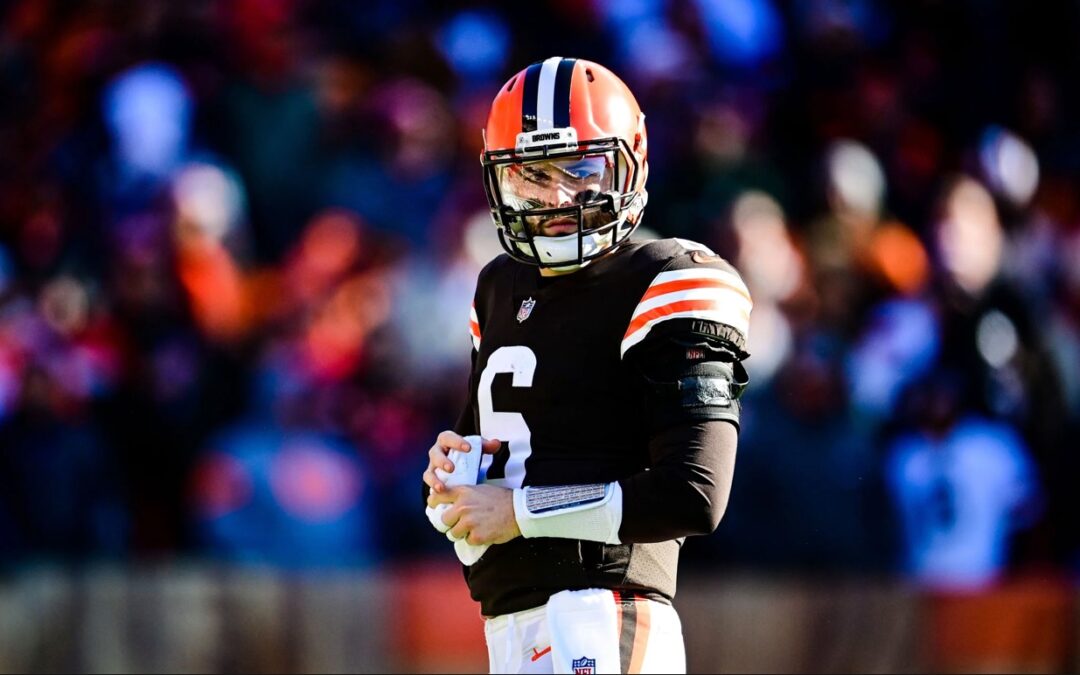 Cleveland Browns quarterback Baker Mayfield survived another week to be abused and doubted a while longer. The team’s 24-22 victory over Baltimore kept it in theoretical contention for an unheard of second straight NFL-playoff invitation but the triumph was not his.

After two weeks, including a bye, and a Game Day hammering from seemingly every football commentator with a mouth, microphone, and makeup artist, Mayfield, with a big boost from Browns defensive leader Myles Garrett, had Cleveland ahead 24-6 at halftime. Specific aspersions had been cast upon Mayfield’s ability to lead his team to victory in fourth quarters.

Furthermore, in Nate Ulrich’s individual follow-up interview with Kurt Warner, the Hall of Fame quarterback-turned analyst, expressed doubt that Mayfield will ever become a franchise QB who can carry the Browns to a championship on his wing—even with a lot of prayer. (If you haven’t read the Ulrich story that appeared in the Sunday, December 12thAkron Beacon Journal, I highly recommend it. Ulrich’s initiative beat the NFL Network to some of what it aired later Sunday morning from a Warner interview with Mayfield that followed a prior assessment.)

The Browns’ victory improved their chance of receiving one of the three AFC at-large playoff berths—from 21% to 37%—according to The New York Times Playoff Calculator. It gave both them and fellow NFC North combatant Cincinnati scant possibility of winning the division. Based on 28,600 simulations, the Calculator puts Browns at 22% and the Bengals at 21%, to overtake the Ravens’ 51%, ,though both have beaten Baltimore. If there were a Mayfield Meter on a long-term franchise QB-caliber contract extension, its number might be a single digit.

Despite the squeaker-of-a-victory, Mayfield did not improve his personal odds with his second-half performance. Of course, as challenging as it might be to throw with a non-throwing shoulder in a harness, and other injuries, it is even more difficult to do so with your throwing arm tied behind you. That is, in essence, is what Coach Kevin Stefanski did to his quarterback Sunday. Because he does not call the plays, offensive coordinator Alex Van Pelt gets a pass until proven otherwise. What was encouraging is that Mayfield fought back. He may not have produced any points in the second half, but his postgame summary lit a fuse. Fireworks ahead?

And that’s also what good coaches do.

Stefanski gave Mayfield his chances early on and his quarterback threw strikes. After a poor first series that prompted booing from the unfriendly confines of FirstEnergy Stadium, Mayfield produced a 17-0 lead with 8:18 left in the second quarter with two touchdown passes. He was deadly accurate, long and short, completing 14 of his first 16 passes for 126 yards, including a 35-yarder to Donovan Peoples-Jones and a 9-yarder to Jarvis Landry, his first receiving touchdown of the season. Mayfield was sailing along with a QB rating of 139.1 and finished the half with a 109 that included a 1-yard TD toss to tight end Austin Hooper and a 16-of-20 total.

Missing two rotational tight ends, David Njoku (COVID) and Harrison Bryant (high ankle sprain), Stefanski reduced his emphasis on multiple tight-end formations, used more wide receivers,   and even inserted Blake Hance, who had been demoted to a backup, as a tackle-eligible. It demonstrated flexibility to which he has not been receptive when it comes to play-calling. If he listened to what Mayfield had to say after the game that could change if Stefanski does not do what he did when Garrett, following an embarrassing 45-7 loss to New England, criticized the defensive failure to adjust during the game. Instead, Stefanski reportedly told Garrett to keep such opinions in-house. In other words, carry a big stick but don’t tell anyone how to use it.

Perhaps seeing yet again how Garrett can seize the moment and infuse the game with his magic will make Stefanski receptive to listening to Mayfield. With 49 seconds left in the half, Garrett smacked backup quarterback Tyler Huntley, who replaced Lamar Jackson (sprained ankle) from behind, stripped away the ball, scooped it up, and scored from 15 yards out. It was Garrett’s 15th sack, the most ever for a Brown since the sack became an official statistic in 1982. (The late, great Bill Glass had 15.5 sacks in 1962 and 16.5 in 1965 for the late, great Old Browns.)

When Mayfield talked with Kurt Warner, he spoke cryptically. Cleveland.com’s Mary Kay Cabot supplemented her interpretation of what he Mayfield had meant with the fact that sources had  told her the quarterback has been unhappy with the season’s play-calling. If Stefanski comes at Mayfield for being Mayfield—“I have to be myself and try and do my job 100%”—he may find himself in a tong-and-tongue war that could have two losers: General Manager Andrew Berry has expressed satisfaction with Stefanski’s play-calling; so the coach holds the upper hand on the quarterback who may look easy to one day replace. A review of how well the New Browns have done this reads like an autopsy list from sad-sack Cleveland’s monstrous QB morgue.

As Cincinnati was losing in overtime to San Francisco 26-23 and Las Vegas was being mauled by Kansas City 48-9 to help Cleveland’s playoff cause, Stefanski not only was lifting his foot from accelerator that Mayfield had stomped but also pulling off his safety harness and bailing on his quarterback. If the second-half offense looked as if wheels had fallen off, it is because the coach had removed them by tying Baker Mayfield’s good arm behind him. He threw only 12 times in the second half, completing 6 for 47 yards and no points. If the defense had not been playing out the practice-week attitude adjustment provided by Garrett, this might have ended badly.

When GM Andrew Berry challenged Mayfield to play down the season’s home stretch of like the No. 1 choice in the 2018 draft, he made no such demands of his coach. With Lamar Jackson,  first round tail-ender of that draft, off the field with his injury and the Ravens defense depleted, Stefanski’s play-calling hogtied his quarterback and turned him into the second-best quarterback on the field in the second half—second to the undrafted Huntley.

Mayfield squawked like Poe, if imprecisely: Quoth the Raven, Nevermore