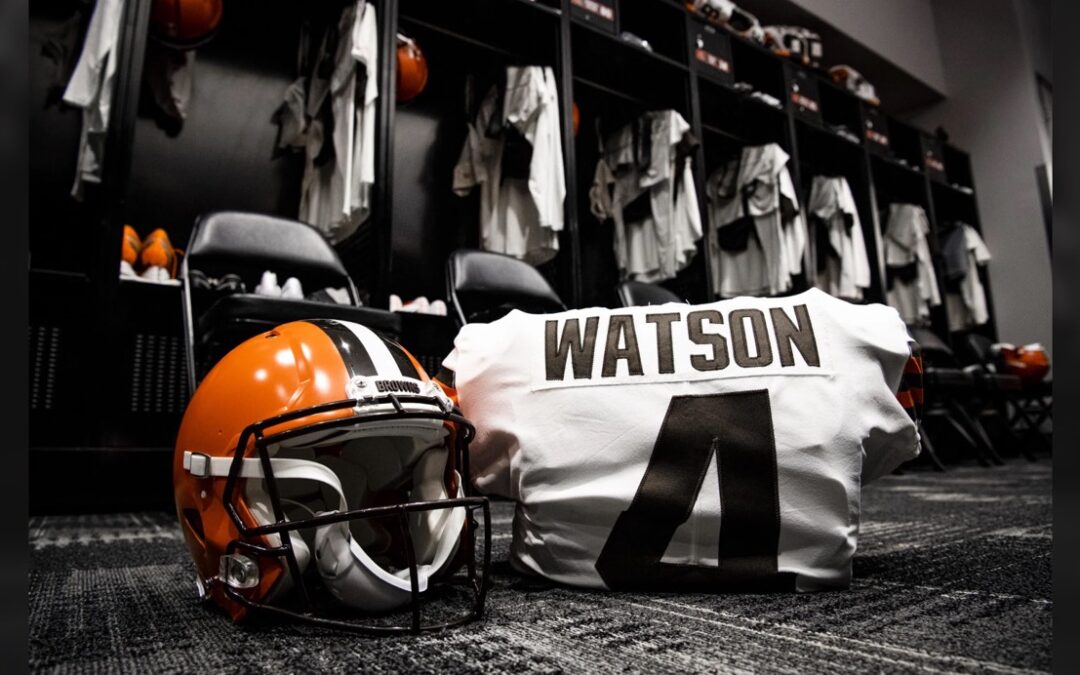 QB1 has dropped everything and left the building. See y’all in December for Game 12

With the finality of Deshaun Watson’s heightened punishment for violating his massage therapist victims and the National Football League’s personal conduct policy, it comes clear that the most difficult days ahead will be those of his counselor—or counselors.

This job may require an army of them.

They will have a greater challenge than Kevin Stefanski or any of his Cleveland Browns coaching assistants. Watson’s counselor whom he has been seeing, and will continue to see during an 11-game suspension and for whatever additional time might be necessary—a lifetime?—must try to help him to understand himself. Clearly, he is lost.

He may be able to pick out in the blink of an eye the receiver to whom he should throw the football. But he doesn’t have a clue when it comes to right and wrong. No fine ($5 million), number of games suspended at a cost of $632,500 per game, nor damage done to the team that gave him the most lucrative guaranteed contract—$230 million—in NFL history has helped him see himself for who he is.

By his account he grew up with “a single-parent mom who has two aunties, who’s a sister, and that’s who raised me . . . to be genuine and respect everyone and everything around me.” Don’t blame mom or aunties but if Deshaun Watson showed respect to 24 massage therapists that is not what came through in the civil lawsuits those therapists filed against the former Houston quarterback who made sure they knew who he was.

The NFL held him to account by assigning retired federal judge Sue L. Robinson to hear evidence presented by league investigators from four of the 24 massage therapists. This occurred only after two grand juries in Texas had declined to indict Watson on criminal charges. Robinson found herself hogtied by the new discipline process that the NFL and the NFL Players Association (NFLPA) agreed to during collective bargaining.

Though Robinson believed the therapists’ versions of what had occurred during the massage sessions and considered Watson’s “pattern of conduct” both “predatory” and “more egregious than any before reviewed by the NFL,” there was no exact precedent to follow and punishment by the NFL for other personal conduct violations had been at best uneven. She noted that while the sexual contact involved was non-violent and Watson was a first-time offender [if with multiple victims], he had shown no remorse.

In fact, since the first civil suit was filed in March 2021 and the NFL began an investigation, Watson had professed his innocence but with Robinson’s ruling imminent he settled 20 of the lawsuits in June 2022 and then three more in August. Robinson suspended him for the first six games of the 2022 season, “the most significant punishment imposed on an NFL player for non-violent sexual conduct.” She also recommended that Watson “limit his message therapy to Club-directed sessions and club-approved therapists.” Not satisfied, the NFL appealed, seeking a year suspension and fine. It appointed Peter C. Harvey, former New Jersey attorney general, to make a final decision. Before he did so, the NFL and NFLPA, on behalf of Watson, agreed to the settlement that ended the process that could have wound up in court.

Meanwhile, Watson, no doubt with coaching from the Browns, had made a feeble attempt at damage control and mitigation of the final decision in a Browns controlled TV-interview before their first and Watson’s last preseason game. [Watson looked as if he hadn’t played in more than a year, which he hadn’t, after demanding to be traded and sitting out 2021.] He issued a non-apology apology not directly to the therapists he harmed emotionally and professionally if not physically, but to anyone affected.

He did more of the same in a statement released after the settlement followed by interviews that Washington Post columnist Sally Jenkins suggested amounted to “head-clutching double talk.” “His non-apology was so sourly cynical and canned,” Jenkins wrote, “such a combination of bad faith and bad breath, that it made you long for a Listerine rinse. He’s sorry. No, he isn’t. He has learned. No, he hasn’t. He takes responsibility. No, he doesn’t. Watson’s utterly insincere written apology after allegedly exposing himself and perving on female massage therapists including everything but a dab at the eyes as he promised to work to become ‘the best version of myself on and off the field’.” To which, Jenkins responded: “Blech.”

Watson fits right in with Browns ownership and management. Perhaps Watson’s counselors could hold group sessions. Owners Jimmy and Dee Haslam send so many mixed messages that it is no wonder there are so many head-on personnel collisions—Baker, you’re our QB; hello, Mr. Watson. The franchise is a train wreck.

Even as the billionaire Haslams announced they had contributed $1 million to fight sexual violence, USA TodayColumnist Nancy Armour pointed out Dee Haslam had intimated that women who sued Watson were sex workers. [Counselors, take note.] “I think there’s just a huge opportunity to talk about the major issues in our country in this area such as sex trafficking, massage parlor use,” Dee Haslam said. Perhaps she could begin the conversation with her quarterback.

“The Haslams can try and spin this—and Lord knows they’ve tried—but the truth is they value Watson’s arms and legs over the bodies and souls of women These women in particular, though the message to all women is clear: Your pain and suffering is inconsequential. Your thoughts and opinions are irrelevant. You are insignificant.”

Examine who in the sporting media has held the Browns and Watson’s feet to the fire and you will find women, including Marla Ridenour, Akron Beacon Journal columnist. Ridenour, who previously wrote a most personal account of being sexually assaulted while in college, noted that the road ahead will not be easy for Watson or those who counsel him on his continuing persistent claims of his innocence: “One mental health professional who emailed a Beacon Journal staffer after the Browns acquired Watson said they had given up treating those who commit sexual assault and switched to treating the victims because some aggressors were incapable of admitting the truth.”