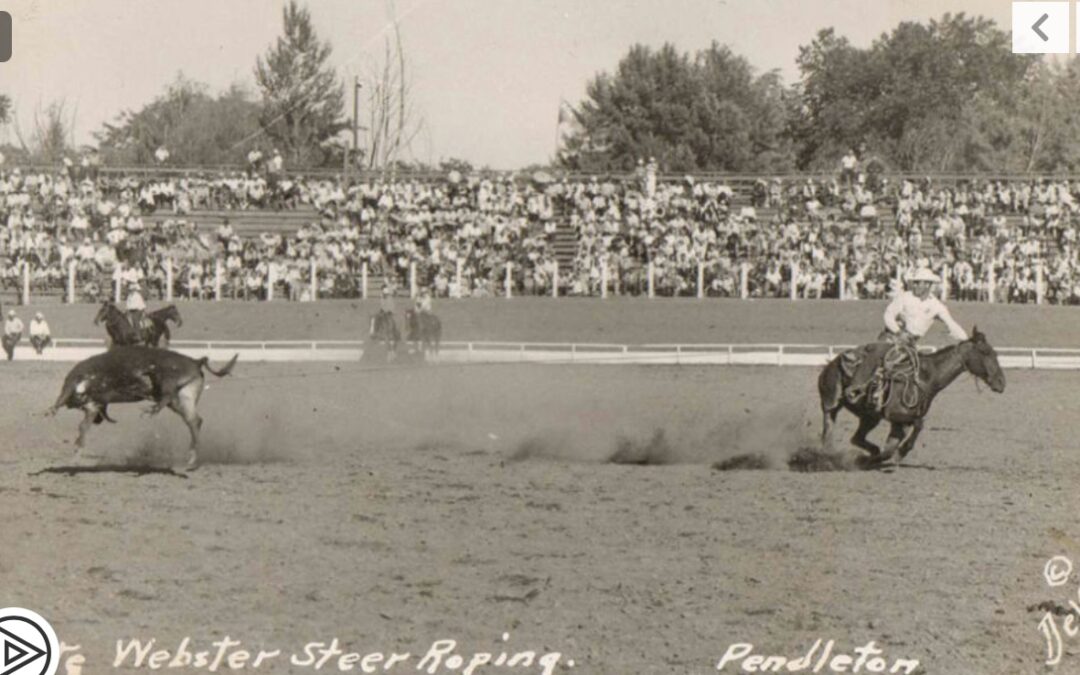 With the July death of Shirley Webster, queen of the Webster ranch and the great love of Shoat Webster, perhaps the greatest of the great steer ropers, Shoat once again loomed as large as life in the old mind of a little boy who had revered his very name.

Shoat and his uncle, Fred Lowry, not only became heroes in the household of Dr. Clarence A. Love but also familiars. My daddy was their veterinarian, tending to all manner of animals on their ranches near Lenapah, Oklahoma, in Nowata County, most especially the horses that Shoat was honest enough to tell people had more to do with him becoming a Rodeo Hall of Famer than anything or anyone, save Uncle Fred.

From the moment Fred Lowry came home to Lenapah, their little place alongside Highway 169, with a rodeo winnings of $1,000 in his jeans, Shoat recognized an opportunity. He told Lowry, according to Shirley Webster, that “if he would teach him to rope, he would work for him for nothing. And he did.”

The sweat equity paid off in fame and riches that could have been even larger if Shoat had not put such red-dirt-country priorities as wife, family, ranch, and doing what was right ahead even of rodeo and championship gold buckles

In the mind, especially that of a child, close-enough-to-touch champions like Howard Chouteau “Shoat” Webster Sr., could seem as if they were mists at first light or wisps of smoke. A person could know they were there, hear their names, even see them sometimes. And still, he could not be absolutely, dead-solid sure that they were real.

They were just too big. That was Shoat Webster.

In truth, though, Shoat was a small boy. Even his 2013 obituary in the Nowata Star made mention of this physical fact. Few, however, sat taller in the saddle. Over a 50-year rodeo career that began with an event in Nowata in 1940, Shoat Webster followed closely in footsteps of his Uncle Fred who from 1916 to 1929 won six world championships. Those were big boots to fill but from 1949 to 1955, Shoat dominated steer roping, winning four world championships and finishing runner-up twice.

He not only cut quite the figure astride his mount—often Popcorn, a bay Hancock-bred gelding—but when he came off the horses that he trained himself, he was adept enough at tripping and tying steers in tie-down roping and in wrestling them into submission that he won some of rodeo’s biggest all-around cowboy titles on its largest stages, places like Laramie, Wyoming and Pendleton, Oregon. When he won the Sam Jackson Trophy three years in a row at the Pendleton Round-Up, 1949-1951, Webster got to haul that big silver prize home for keeps.

I never saw that beauty, but as a boy I had the opportunity to see Shoat compete in rodeos around Northeastern Oklahoma, and I know that a couple of times Daddy let Little Stevie tag along when he worked the Lowry and Webster ranches that were eventually combined. I kept my mouth shut—a rarity—and laid low, because I knew that I was in the presence of what amounted to royalty in more than our neck of the woods.

Shoat was inducted into so many rodeo Halls of Fame that it can give a person writer’s cramp just to list them all. You’re always half afraid that you are going to fail to mention one and someone will get their nose out of joint. The one that pretty much sums up Shoat Webster’s status, however, is the Pro Rodeo Hall of Fame, which he joined in 1979 as part of the inaugural class.

And if that does not impress . . . Shoat Webster turned down the opportunity to be the Marlboro Man, the rugged cowboy advertising symbol for a tobacco company. And, he did it because he thought it would be wrong, even before the full extent of the health dangers that tobacco presents were known. “I never cared for smoking, especially by kids,” he was quoted as saying. “And, if they saw ol’ Shoat doin’ it, they might have to do it, too.”

“Somebody asked him about giving up the money,” Shirley Webster once explained, “and he said, ‘I don’t need it that bad.’”

That answer fit perfectly with Shoat Webster’s decision to limit his rodeoing and tend to ranching and his family (not to mention paying his vet bills). He could have made much more money than he did had he gone to more rodeos and entered more events. In a 2005 ProRodeo Sports News interview, Webster recalled that he went to “about 36 rodeos per year” and that he “won 34 out of the 36 rodeos.” Not to brag or be too precise, Shoat went on, but his “winning percentage was really up there.”

The success did not come by chance. “What made him one of the best of all time,” suggested rodeo announcer Justin McKee, who, like me, grew up watching Webster rope, and later married his niece, Jeannie, “is that he worked harder than everybody else. If you talk to anybody who was ever around him, they would tell you he was physically the toughest man they’d ever been around, and that would include any bull rider, bronc rider, or bulldogger.”

McKee and I may be a tad prejudiced in Shoat Webster’s favor—childhood heroes can be the biggest heroes of all—but I do not doubt what McKee told ProRodeo.com in 2013 at the time of Shoat’s death at 88. “Back in his day,” McKee said, “Shoat Webster was huge. In the rodeo towns that had steer roping like Cheyenne and Pendleton, there wasn’t a bigger celebrity in those towns than Shoat. He was the king; he was Elvis.”

Actually, in the early 1950s, in Lenapah and Nowata and rodeo towns everywhere, but especially those in Oklahoma, Shoat Webster was bigger than Elvis. He also looked way better in practical chaps than Elvis ever did in sweat-soaked Vegas leather celebrity duds.