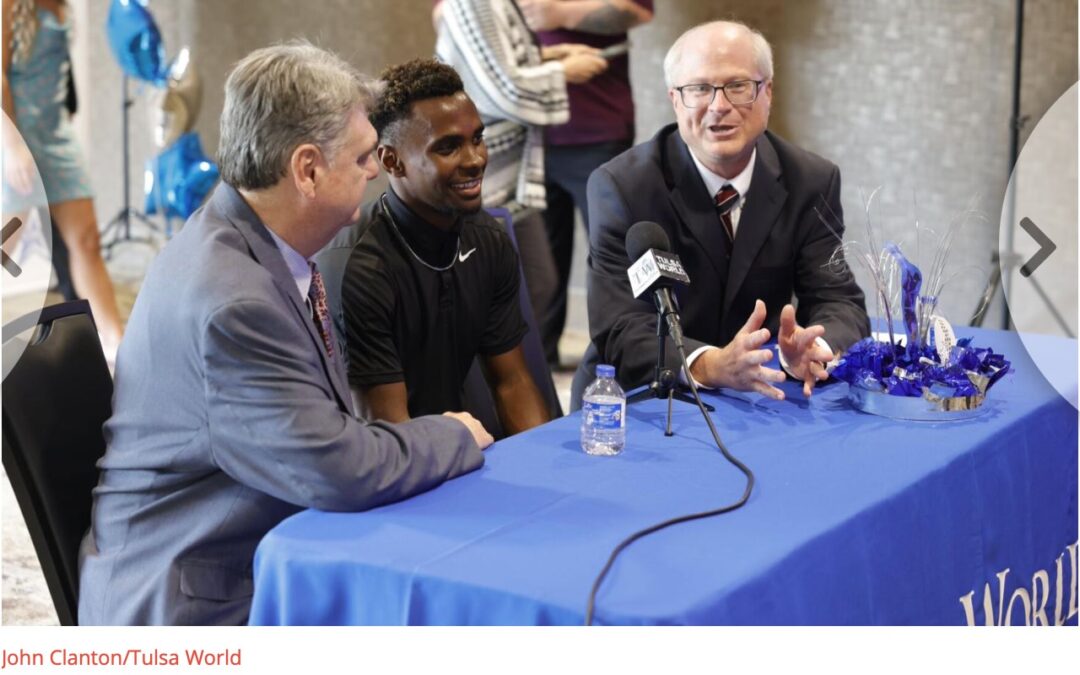 Editor’s Note: This column by Barry Lewis, Tulsa World high school sports editor, appeared in The World and online, as part of a column featuring highlights from the World’s “pre-game” show that Lewis co-hosted with fellow writer Mike Brown on Facebook Live prior to the fifth annual All-World Awards. The event honored the best Tulsa area high school athletes, coaches, and fans from the 2020-21 school year.

But the roots of the book are football and the friendships that Love developed while growing up playing that sport in Nowata before the painful move he had to make late in his sophomore year when his father was transferred to California.

“It’s clearly not just a football book, but there is some good football in it,” Love said.

Love initially intended to write a book of essays on quarterbacks, but at the urging of his wife, Jackie (also a former Tribune writer), it changed directions and became more of a memoir after attending his Nowata High School class’ 50-year reunion in 2014.

“It turned out to be more than I wanted it to be,” Love said. “It’s hard to market, but I’m not sorry I did it. One of the book’s strengths is it has a lot of different things to draw people to it — there’s football, growing up in a small town, aspects, that era, coming of age, writing and journalism.

“The fast friends means more to me than anything else in the title. When we moved I lost those friends in that particular place.”

One of those friends was former Nowata quarterback Kenneth “KB” Berry, who was killed in action in 1968 during the Vietnam War. Love said Berry’s acumen gave him the potential to have been an outstanding coach.

“A real satisfaction about the book was to be able to get the real story about his death right,” Love said.

Another QB essay that remained in the memoir was on former University of Oklahoma standout Steve Davis. Love covered the Sooners during Davis’ career at OU that included a 32-1-1 record and two national titles from 1973-75. The Davis section also includes other OU QBs such as Bobby Warmack and Jack Mildren, as well as a look at the Sooners’ offensive transformation and success in the Chuck Fairbanks era and Barry Switzer’s early years as head coach.

Love was on the Tribune’s sports staff from 1973-77, and after a stint at the Miami (Florida) Herald, he returned to the Tribune as a general assignment reporter in 1978-79. The book includes memories there of Oklahoma Journalism Hall of Fame members Jay Cronley and Bill Harper, who both later worked at the Tulsa World.

After many moves during the first 13 years of his journalism career, Love arrived at the Akron Beacon Journal in 1981, where he wrote columns for several sections over 20-plus years there, and has lived in Ohio for 40 years.

“Football, Fast Friends, and Small Towns,” was published last September and is available for $16.99 in paperback at amazon.com, Barnes and Noble and other book-selling sites.

“I like the multi-faceted aspects of what I’ve done in journalism and writing, and this book is a culmination of that,” Love said.

This is Love’s sixth book – but only one, on former Notre Dame football coach Gerry Faust, focused on sports.

Love enjoyed his time in Tulsa writing about college and high school football, and said “I wish we were in Oklahoma,” and that OU football remains a great interest of his. He still writes about sports and other subjects on his website — stevelovewriter.com – where he indicates he is a “proud Oklahoman.”

“I’ve written a lot about Baker Mayfield,” Love said. “When he was drafted I was overjoyed about him coming to Cleveland but given the Browns’ track record I thought they were going to screw up my quarterback. I look forward to his continuing improvement.”