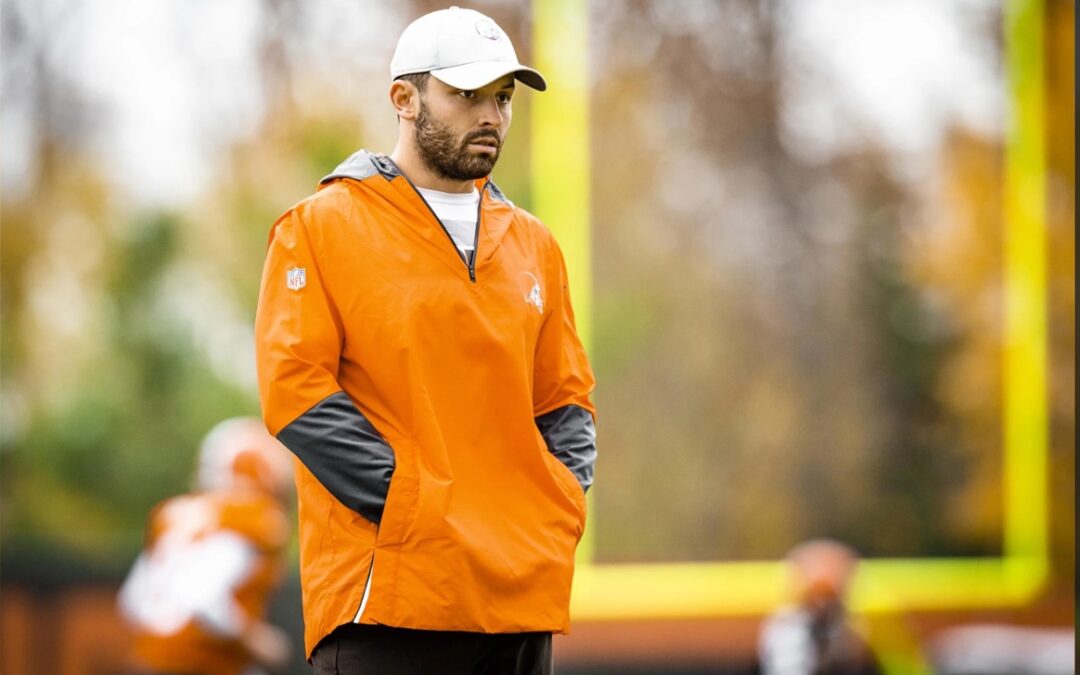 A pensive Baker Mayfield may be thinking about life and death

It isn’t even Game Day and already Cleveland Browns quarterback Baker Mayfield has proved a winner this week, because some things are more important than football. His more than 10-minute Wednesday question-answer session with the media ended in a way that revealed more about Mayfield the man than it did about the greatest physical challenges of his career and the emotional strain of a worrisome 5-5 record.

As he looked around the media room and hesitated more than once, seemingly searching the furthest recesses of his mind for the just-right-answer to a question that had nothing to do with football, Mayfield looked as if he had no answers to a question more difficult than what happened to the Browns in a 45-7 loss to New England.

Someone wanted to know his feelings on the eve of the scheduled execution of Julius Jones for a murder in Oklahoma in 1999. Jones was 19 when it happened. He was attending the University of Oklahoma and wanted to be a basketball walk-on, something that Baker Mayfield can, of course, relate to, having twice been a football walk-on—first at Texas Tech and then at OU where he went on to win the Heisman Trophy.

Mayfield had become over the years one of many champions of Julius Jones and the  possibility that he did not murder 45-year-old Paul Howell in the driveway of Howell’s Edmond, Oklahoma, home. Thousands of ordinary people had protested the execution that only Governor Kevin Stitt could stop but had not so at the time Mayfield was asked the question. The Oklahoma Pardon and Parole Board had twice in recent months recommended that Jones’s sentence be commuted, specifically to life in prison with the chance of parole, based on doubts that had been raised about Jones’s conviction.

The credible Innocent Project had called for Jones’s exoneration. Mayfield, in a short NFL 2019 documentary, had spoken up for Jones, who has professed his innocence since his arrest. Viola Davis, the actress, included Jones’s case and doubts surrounding it in a 2018 documentary that included the fact that a co-defendant who testified against Jones had received a plea deal. Kim Kardashian West also featured the case in a podcast, and it received attention on the Late, Late Show with James Corden. Even Howell’s former girlfriend, Connie Ellison, shared her doubts about Jones’s guilt and supported him at his recent Pardon and Parole Board hearings. A list of basketball players with Oklahoma connections, college and professional, who fought for Jones includes Blake Griffin, Trae Young, Buddy Hield, Russell Westbrook, and Shai Gilgeous-Alexander. Even Steph Curry of the Golden State Warriors reached out.

As far back as the 2019 documentary, Mayfield had been beating the drum for Jones. “Seeing the evidence and hearing the case,” Mayfield concluded in the NFL documentary, “he’s on death row for something he didn’t do. Helping out good people is something I’m passionate about, and Julius is a good person who doesn’t deserve this.”

Though these situations occur in many places, the truth can be difficult to sort out in Oklahoma, even if a person diligently seeks it and studies the facts and evidence objectively. I know. I grew up in Oklahoma and spent much of the 1970s working in the state as a journalist. I love the state. It is and always will be home, but it is not generous to those believed to have committed serious crimes, especially if they’re Black.

“It is rare for an Oklahoma governor to grant clemency to death-row inmates, having only been approved four times since executions were resumed in 1990,” The Oklahoman newspaper pointed out. Mayfield probably knew much of this as he attempted this week to address Julius Jones and his fate.

“Yeah, it’s pretty rough to be with you,” he said, choking up. “That isn’t something that’s easy to talk about. Been trying to get the facts stated and the truth to be told for a while. But it’s tough to think about.”

To many questions about his and his team’s status going into a Sunday game against Detroit at FirstEnergy Stadium, Mayfield responded with a non-response: “It is what it is.” But this was different. This was about a man’s life and the possible end of it.

Just hours before Oklahoma was to execute Jones with a lethal injection similar to a recent one that had not gone as planned, Governor Stitt did commute Jones’s sentence. He did not, however, do it in the manner in which the Pardon and Parole Board had recommended. He extended Jones’s life but it will be in prison, where he has spent nearly 22 years, but he did so “without the possibility of parole.”  That might be appropriate if there had not been so many questions raised about Jones’s conviction at the hands of a district attorney, since deceased, whose death penalty cases have been overturned one third of the time due to “prosecutorial misconduct,” according to Yahoo Sports Columnist Dan Wetzel whose information came from the Innocence Project.

Meanwhile, as Baker Mayfield was learning that Jones was still alive, his career was being dissected on Cleveland.com/The Plain Dealer by Browns writer Mary Kay Cabot. She pointed out Mayfield’s on-field struggles, acknowledging the part that injuries to his left shoulder, right knee, and a foot, may be playing in jeopardizing his up-and-down 4-year Browns career, with three head coaches (and an interim) and four offensive coordinators: “It’s hard to blame him in this season full of injuries and adversity.”

Yet both Cabot and Yahoo Sports’ Jay Busbee provide plenty of ammunition to conclude that Mayfield may be another victim of the Sucking Sink Hole of Quarterbacks that is Cleveland. Busbee, however, after having listened to Mayfield argue “passionately and thoughtfully on behalf of convicted death row inmate Julius Jones,” had an addendum: “A whole lot of fans don’t want to hear anything from football players but football. But players are human beings, too, and in a time when empathy is in even shorter supply than Cleveland championships, it’s good—really, it’s necessary—to see players caring about something larger than next week’s opponent. Mayfield seems to have a sense that there’s more to life than football. That might not help him get past Baltimore [and into] the playoffs. But Cleveland ought to take pride in him all the same.”

Sadly, being a good quarterback and a good person are not given equal weight.