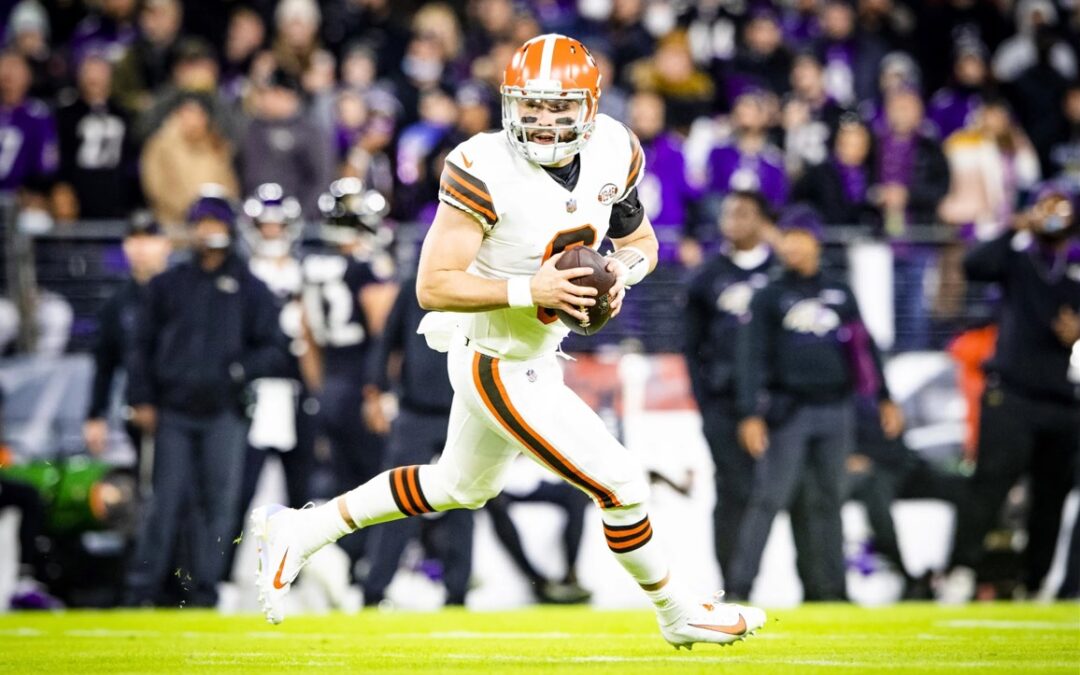 Against Baltimore, Baker Mayfield has to be on the move where he is best

Since someone is always slapping Baker Mayfield in the face with the Browns’ five-game, season-ending gauntlet that he faces, how the quarterback has historically reacted to such slights seems more than pertinent now.

An inference can be drawn from the road ahead populated with teams whose records are as good as or better than Cleveland’s 6-6—8-4 Baltimore, 6-6 Las Vegas, (at) 9-3 Green Bay, (at) 6-5-1 Pittsburgh, 7-5 Cincinnati: the Browns aren’t up to negotiating, with a 4-1 or better record, this demanding path to a second consecutive NFL playoffs.

Since high school at Lake Travis, outside of Austin, Texas, Mayfield has had to listen to media whom then Vice President and now disgraced Spiro T. Agnew labeled “nattering nabobs of negativism.” In Mayfield’s case, it wasn’t just the hated media. His own coaches doubted him. They said he was “too short” and “too slow” to win the quarterback job when he was a Lake Travis junior. And, he was healthy and spry then.

He hears the echoes today, as a fourth-year NFL starter trying to recover enough from multiple injuries—non-throwing shoulder and lower extremities: left heel, right knee, groin—to survive the gauntlet and reassure coaches and executives that he is a quarterback worth having. His high school coaches were wrong. He not only won the QB1 job but also took Lake Travis to an undefeated season and a state championship.

If Mayfield forgave them their doubts, there is a long list of doubters and carpers whom he hasn’t. He has a long memory, his smartphone a longer one. The Mayfield Enemies List is perhaps the most famous since that of also disgraced President Richard Nixon.

Even before he walked on at Texas Tech University for the 2013 season and met Kliff Kingsbury, now coach of the NFL Arizona Cardinals, other coaches had slighted him. Mayfield wanted to be Gary Patterson’s quarterback at high-riding Texas Christian. He thought he was going to be. “They led me on,” Mayfield told writer Albert Chen in 2015 for a Sports Illustrated story. “They told me they were going to give me a scholarship. Then, a week before signing day, they told me that they weren’t going to offer a quarterback in my class.” But, TCU did give a scholarship to a rival quarterback at Temple, Texas. He happened to be 6-foot-3, two or three inches taller than Mayfield.

“I was pretty insulted,” Mayfield told Chen. No doubt still is.

He should be insulted, if not at what some in the Browns organization say but, as with TCU, at what they do—or don’t do. The Browns profess to believe in Mayfield, but a person should bet big on how Mayfield is quietly viewing his contract situation. He is signed for 2022—without a long-term extension and with the gauntlet thrown down:

Win and get us to the playoffs—or else.

Mayfield likes challenges. He does not like doubters. Kingsbury played games with him after TCU had handed Mayfield gift wrapped to the coach. Mayfield became the first walk-on freshman quarterback to start in the Big 12 Conference. He was 5-0, including a victory over TCU, when he went down with a knee injury. When he returned, toward the end of the season, Kingsbury did not give Mayfield his job back and was slow to award him the scholarship he had been promised. Is it any wonder that Mayfield has fought to stay on the field, even with injuries? He knows what happens to those who sit.

Before Kingsbury knew what had hit him, Mayfield had mounted his personal Sooner Schooner—mom Gina’s vehicle, to be precise—and she had driven him across the state line and into Oklahoma where he found a home—again as a walk-on—in Norman, home of the college he had rooted for as a boy. Though he knew Coach Bob Stoops had an established sophomore quarterback who had just beaten Alabama to become Sugar Bowl MVP, Mayfield surprised Stoops by showing up unannounced and asked for a chance. Smarter than your average sagebrush or coach, Stoops gave it to him.

After leading the scout team and sitting out a season as a transfer, Mayfield took Trevor Knight’s QB1 job, eventually got back the year Texas Tech denied him for going to another Big 12 team, and beat the Red Raiders, even after Patrick Mahomes had become QB1, a job he took from Davis Webb who had replaced Mayfield.

As Mayfield checked off paybacks on his doubters-and-offenders ledger, he put himself on other lists: 2015 Heisman Trophy candidate, 2016 Heisman Trophy finalist, 2017 Heisman Trophy winner. He did this by twice taking OU to the College Football Playoffs. It never has been easy for Baker Mayfield, and it is only more difficult as a pro.

The man who believed in Mayfield enough to choose him No. 1 in the 2018 draft, general manager John Dorsey, is gone, swept away with Freddie Kitchens, his poor choice to succeed Hugh Jackson, worst Browns coach ever. The churning chaos of constant change has planted seeds of doubt even in Mayfield. After a record-setting first year, he regressed in year two under Kitchens, before regaining his footing in the second half of his first season with yet another coach, Kevin Stefanski.

Stefanski professes to believe in Mayfield yet provides too few play-calls with which he can succeed, given that Mayfield’s game is moving to find lanes through which he can throw. He isn’t tall or a band director who can climb a tower to orchestrate from a pocket weakened by the loss of right tackle Jack Conklin to injury. Unless a bye-week’s rest has cured all that ails Mayfield, the going will be stickier than Andrew Berry predicts.

During his bye-week media address, the general manager concurred with Stefanski and went even further—despite the worst five weeks of Mayfield’s career. Berry announced: “We expect him to play his best stretch of the year after the bye.” And if he doesn’t? He does not have a long-term extension in which to wrap himself as in a Linus blanket. He understands his and his team’s backs-against-the-wall situation. “It is what it is,” he said Wednesday. “So that is where our heads are, and that is where I play my best.”

Expert outsiders—Kurt Warner, a quarterback in the Pro Football Hall of Fame and now an analyst, and Drew Brees, recently retired to TV analysis and soon-to-be Hall of Famer—have weighed in with supportive comments about Mayfield. Neither, however, suggested the Browns should be offering a new deal now. “The story’s has yet to be written there,” Brees said. Very logical—the kind of logic that has burned Mayfield coaches and observers over the course of his career. Ask Kliff Kingsbury, et al.

Mayfield paid Kingsbury back for his inattention, hesitation, and snub. Now the Browns’ Ivy-League troika, a triumvirate of great minds if ever there was one in the NFL—Berry, Stefanski, and Chief Strategy Officer Paul “Money Ball” DePodesta—have carefully avoided doubting Mayfield yet have positioned themselves to land on his doubters list.

Mayfield has seen this all his life. It makes him dangerous, his “secret way of keeping the fire burning,” as he explained in Sports Illustrated. He has previously discovered the best revenge can be moving on and coming back to take revenge on the doubters. I think there is space on Baker Mayfield’s phone for a few Browns names and mug shots.