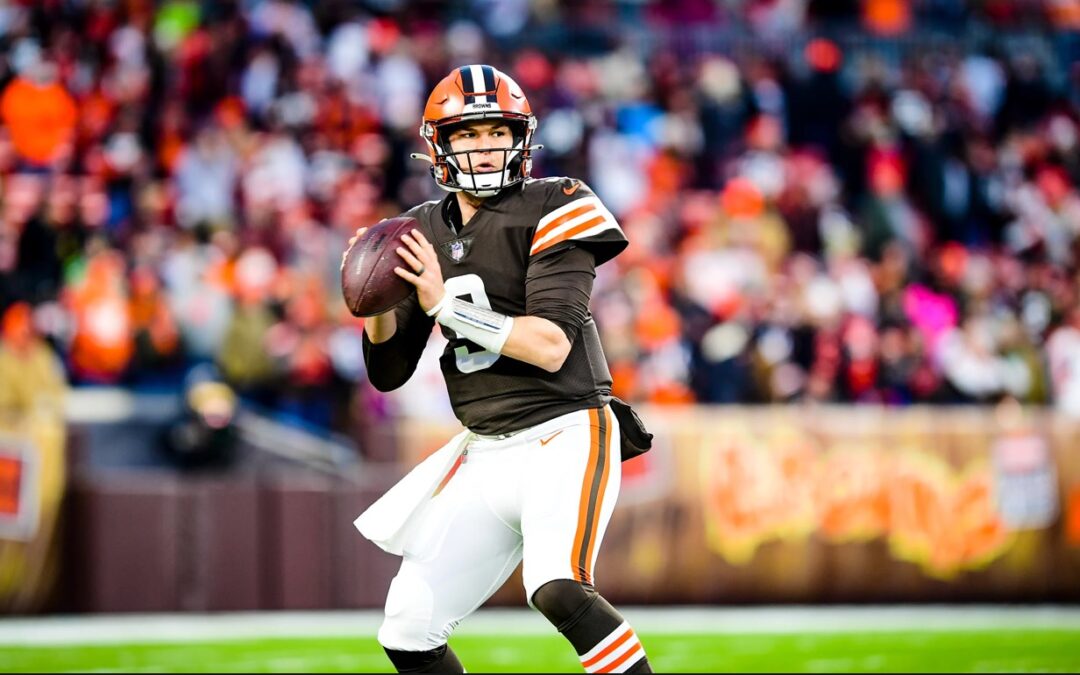 QB3 Nick Mullens wobbled early but stayed on his feet as the 32nd starting quarterback since the Cleveland Browns were rechristened in 1999. He might have been elevated to sainthood—St. Nick does have a ring to it—had he not failed to notice the black cloud.

That’s an understandable oversight. Mullens is still on training wheels when it comes to understanding that for Northeast Ohio in general and Cleveland in particular nothing is given. Some famous wayward son of Akron reminded everyone of this upon his return to the Cavaliers. He was right. He and his teammates had to worklong and hard to win a blue-collar, hardhat NBA championship. Mullens will get it. When he rambled and scrambled until he found tight end Harrison Bryant nestled in the front of the end zone for what looked as if it might be a deciding 6-yard, fourth-quarter touchdown pass, it produced the COVID-19 decimated Browns’ first lead (14-13) over the Las Vegas Raiders. That felt otherworldly to Mullens, but it was only the light before the darkness.

“I really believed in the fourth quarter,” Mullens explained later, “that this night was destined for Cleveland—but sometimes it does not work out like that.”

No, it doesn’t. It is part of the reason that Mullens had had the opportunity to throw his first touchdown for the Browns—he had previous experience, if not great success, starting for San Francisco—and Bryant had caught his first touchdown pass in the NFL. He was the 32nd starting quarterback for the team, because both QB1 Baker Mayfield and QB2 Case Keenum had come down with the virus and were not allowed to play. But how it would end had been forewarned by placekicker Chase McLaughlin.

A cold streak—that black cloud again?—had engulfed McLaughlin, who began the season reliably (he made his first 10 but had since missed 5 of 10). He may not, it seemed, have the ice water in his veins that multiple 50-plus-yarders might have caused us to believe. On a night that was not as cold as one might expect for the evening before the official onset of winter, he lined up a 47-yarder and put it prettily between the uprights. Only one problem. The Raiders had called a timeout before as he kicked. The move by interim head coach Rich Bisaccia, who had been special teams coordinator for Jon Gruden, iced McLaughlin. He froze and missed the second kick.

“You have to make those kicks,” said special teams coordinator Mike Priefer in the absence of Coach Kevin Stefanski, who also had been sidelined by COVID-19, as he had been a year ago. But then, the Browns beat the Pittsburgh Steelers anyway.

Priefer used the same last-second strategy on Vegas kicker Daniel Carson—but Carson made his second 48-yarder anyways and his third field goal won the game and spoiled Nick Mullens’ premonition of a fairytale ending that would have lifted his team into first place in the AFC North. Instead, the Browns find themselves last in their division and on a short week to prepare for a sojourn to Green Bay for a Christmas afternoon meeting with the 11-3 Packers whose record is the best in the National Football League.

Which of the 22 players from the COVID reserve will test off of the list and be able to play Saturday will continue as a question, as will be the possibility of other positives. As encouraging as it would be to the Browns to beat the Packers, it might not be much, if any, help in securing an at-large playoff berth. Their 7-7 record after the 16-14 loss puts them behind a raft of teams, including the Raiders whose victory provides them with the playoff tie-breaker should their record and that of the Browns end up identical.

Depending on which you prefer—ESPN’s Football Power Index (FPI) or The New York Times Playoff Simulator—the Browns’ chance of reaching their second consecutive playoff is 17% using the FPI and 21% based on the Times’s 150,000 simulations. The best chance for Cleveland is to win the AFC North. They visit the Steelers on Monday night January 3 and play host to the Bengals on January 9.

“It’s completely up for grabs still,” said defensive end Myles Garrett of the AFC North. “We’ve got to keep on working and keep on winning. The goal is still to win out.”

Garrett suffered a groin injury in the fourth quarter but had not been much of a pain in the Raiders’ you-know-what prior to that. One of five Browns named Pro Bowl players—the others were guard Joel Bitonio, who filled in at left tackle against the Raiders, guard Wyatt Teller, running back Nick Chubb, and defensive back Denzel Ward—Garrett was not the overwhelming presence he can be and had to be for his team to win. Neither was, at least in the first half, the team’s best offensive player. Chubb gained only 14 yards but ended up with 91, on a workhorse 23 carries. As good as he was, Chubb couldn’t get a first down on the final possession that would have kept the ball away from Raiders’ quarterback Derek Carr who quickly got Carson into field-goal range.

At the end a troubled year, Cleveland remains a troubling team. Injuries and virus notwithstanding, and both have taken a toll, Stefanski, last year’s Coach of the Year, has not coached as well and Baker Mayfield, one of the more injured players, has not played as well as he did during his first season with Stefanski and offensive coordinator Alex Van Pelt whose magic as fill-in play-caller last season seemed missing versus Vegas. When the virus came calling again, it took down players whom the offense needed.

The Odell Beckham Jr.-created drama and his departure served to frame the offense’s need for improved receiving, which OBJ never provided to the degree his legend would have led one to expect. Whatever happens in the remaining three games, General Manager Andrew Berry’s work on the roster is not done. The talent he added was overhyped and has underperformed. Also, special teams need players who can get the team field position, as Josh Cribbs used to do with his returns, and a placekicker that is half as reliable as Phil Dawson. Though players, coaches, and management profess to pay no attention to the what the media writes or says, they might consider reading Marla Ridenour’s column in December 18 print edition of the Akron Beacon Journal or on Ohio.com. It dissects smartly the reasons for the team’s playoff plight. It isn’t COVID.

It is a litany of self-inflicted deathblows that should spike the Ho-Ho-Ho’s for one and all.