Mayfield Memorandum 29: A Season of Aughts 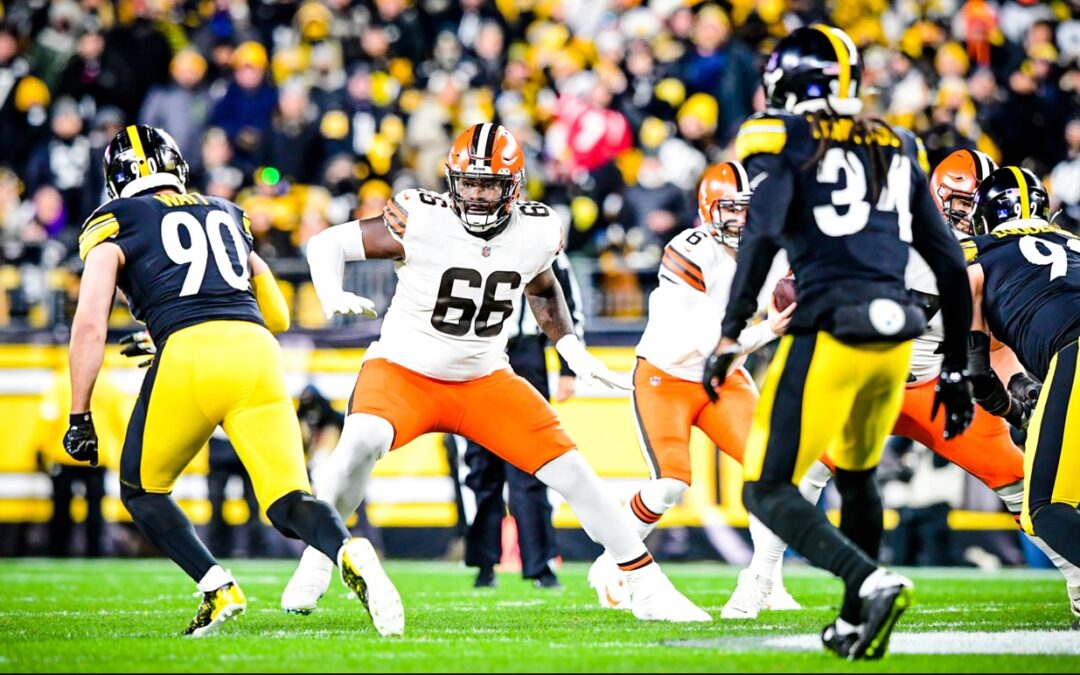 Too much T.J. Watt (90) proved too much for James Hudson (66) and Baker Mayfield

As the Cleveland Browns were solidifying their claim as the worst team in the best division—AFC North—of the National Football League, quarterback Baker Mayfield’s nightmarish performance was earning him a passer rating of 0.0 in a 26-14 loss at Pittsburgh.

If QB ratings included negative numbers, it would have been worse.

It was so bad that they should rename the decimal point separating Mayfield’s double aughts the dismal point. Until his best and final drive of the first half, already trailing 10-0, Mayfield’s other numbers only fleshed out these dismal points in fact: one completion in 10 attempts—he ultimately threw 10 incompletions in a row, with plenty of help from his alleged receivers—for 20 yards, one interception, and, of course, no touchdowns.

Mayfield and the Browns offense was the dumpster fire that has proved to be its real self, after a 2020 season of promise capped by a playoff victory over these very same Steelers. They were the perfect foe to facilitate Ben Roethlisberger’s Heinz Field farewell after 18 years during which he made them lament time again having chosen talented but criminally troubled tight end Kellen Winslow II instead of Big Ben in 2004 NFL Draft. Roethlisberger will be joining Winslow’s father in the Pro Football Hall of Fame after dominating no team as he did Cleveland.

Who knows, the team might have made a better choice if its coach at the time had not been Butch Davis. He had recruited the younger Winslow to the University of Miami and coveted him. But Winslow suffered a broken leg as a rookie and so began a downward spiral that included wrecking a motorcycle in 2005 and then, later, his life when he was convicted of various sexual offenses. Meanwhile, Roethlisberger found ways to rub Cleveland’s nose in its choice including his regular-season 25-2-1 record vs. one team in NFL history.

Big Ben, Miami of Ohio’s star from Findlay, evolved from a big man (6-foot-5, 240 pounds) who threw off tacklers as if they were ragdolls to strong-armed flame-thrower to the latter-day QB who protected his older, more stationary self, less than stellar lines with a quick-trigger. He was that quarterback during a final Monday Night Football appearance in which his statistics did not impress but the result, as usual, did.

Mayfield and the Browns, on the other hand, have devolved from a 2020 team that could have trouble putting up points to one that has found it next to impossible to do so in 2021. Devo, famous Akron band, ought to write a song about them. Mayfield, who has earned his own performing chops this season for his Progressive TV commercials, could replace his orange helmet with a Devo red cone hat and be the front man. If his passing does not become more accurate and his on-field confidence return, he could be looking for a new team and gig.

As has been increasingly the case since his labrum was torn in the second game of the season and a shoulder fracture later revealed, Mayfield has appeared uncomfortable. Foot and knee injuries followed. Finally, Alex Van Pelt, offensive coordinator whom faltering coach Kevin Stefanski has refused to allow to take over the play-calling, admitted that the protective harness Mayfield has worn has hampered his throwing. What was the first clue? It has reached the point, with the Browns eliminated from the playoffs and the loss to Pittsburgh guaranteeing a losing season, that Mayfield said he would have surgery—and it will be sooner than later.

Mayfield’s uncertainty Monday night whether he would play in Sunday’s final game at FirstEnergy Stadium against the Cincinnati Bengals, AFC North champion, became assured Tuesday when Stefanski announced Mayfield’s season was over. What good could come from going on with a lost 7-9 team? Pittsburgh gave him another physical and psychological beating with nine sacks—four by NFL leader T.J. Watt whose 21.5 for the season are one shy of record-holder Michael Strahan’s 22.5—five passes batted down, two interceptions, and a couple of good whacks with a partridge from a pear tree. If Mayfield did anything right Monday night, it was during his postgame media comments. He sought to protect from criticism his rookie right tackle James Hudson, who had tried his best, if in vain, to protect him from the marauding Watt. Mayfield laid it at the feet of Stefanski and coaches who failed to make adjustments that could have helped the inexperienced Hudson, who was filling in for Pro Bowler Jack Conklin.

When questioned about the game plan that once again underutilized Pro Bowl running back Nick Chubb against a defense ranked 32nd—last—against the run, Stefanski couldn’t or wouldn’t explain why Chubb had carried the ball only 12 times for 58 yards, other than he suffered a rib injury. As for his plan, it was to “score some points” but “whatever it was, it didn’t work.”

Rather than leave off on that brilliant, cheery note, which could suggest the mischief the Browns’ Ivy League brain trust might have in mind for the offseason—give up too soon on yet another imperfect quarterback?—let ESPN staff writer Bill Barnwell offer different cheer with his ranking of the eight last-place finishers in their divisions and their chance of jumping from worst to first in a single bound, as the Bengals have done.

Barnwell remains convinced that the Browns are not “much different from the guys who went 11-5 and made it to the playoffs in 2020.” He places them behind only the NFC West’s Seattle and believes they have the “best roster of any of these eight teams.” That may be true. What is not true is that their talent is as good as anyone’s, which the Browns brainiacs seem to believe.

When it comes to Mayfield, he writes: “It would be a surprise if they gave [him] an extension this offseason, but with the 2018 No. 1 overall pick entering his fifth-year option campaign, it would also be unexpected if they brought in somebody to take his job.” Do not misunderstand: Barnwell is not certain “what sort of ceiling the Browns have with Mayfield at the helm.” And, “without a change at quarterback, the Browns might only be able to settle in this nine-win range” because “the AFC North remains one of the most difficult divisions in football.”

The answer is not blowing its $40 million in cap space on a costly veteran QB when the Browns need a major investment in reconstructing the receiving corps and, if Barnwell is correct, to get healthier, especially Mayfield, and play better red-zone defense. Those improvements might just eliminate the dismal point that this season became.