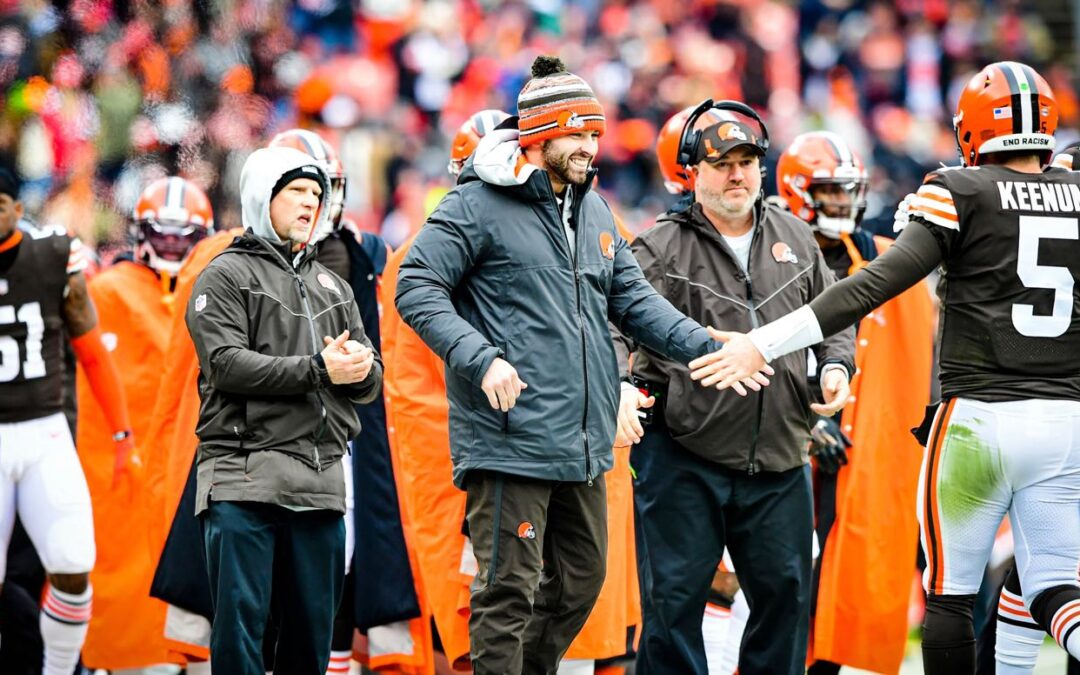 National Football League coaches like to claim that their goal is to put their teams and players in situations that provide them the best opportunity to succeed. But this isn’t always true. Take the Cleveland Browns. (Please!)

They beat Cincinnati 21-16 on Sunday at FirstEnergy Stadium in the final game of their longer (17 games) woebegone season. And what, pray tell, did this “success” get them?

In fact, all that the victory got the Browns was a lower choice in the 2022 Draft (No. 13 instead of 10). And, because they climbed out of the AFC North cellar and into a tie for third place with Baltimore (loser to Pittsburgh and end-of-the-trail quarterback Ben Roethlisberger), Cleveland receives the “honor” next season of playing third-place teams from the AFC West (9-8 LA Chargers), AFC South (4-13 Houston), and NFC East (7-10 Washington) instead of fourth-place finishers—7-10 Denver (AFC West), 3-14 Jacksonville (AFC South), 4-13 New York Giants (NFC East). What a reward.

The Browns love analytics. Crunch those numbers and explain to me how beating Cincinnati was a win. I know. I know. They keep score to determine a winner. Teams should not tank or even mail in an effort. Play with pride and a season-ending victory can set the tone for what’s to come. It was a prideful if hurtful exit, if you will.

If I am being realistic, instead of falling back on what I learned on the field and during more years than I care to count as a sports columnist, the “victory” over the Bengals was registered not so much on the scoreboard but because of what occurred on the Browns sideline, up in the team’s radio booth, and to the bank account of defensive end Jadeveon Clowney and creditability of running back D’Ernest Johnson and his future.

Unlike Burrow, who was probably burrowed in at home, Browns quarterback Baker Mayfield worked the sideline in stocking cap and parka, encouraging teammates whom he wants to continue to support him despite his regressive play. I expect he would have been there anyway, but if multiple media reports concerning his season-ending interview with Coach Kevin Stefanski on Friday prove correct, the team has done its part to douse the fire that Mayfield critics and detractors have been tossing logs on as their QB1 simmers at the stake and Essence of Buddy Boy wafts into the distance.

Because he is headed for home in Austin, Texas, before going on to California to have surgery on the torn labrum that he suffered in the second game of the season, Mayfield met with Stefanski early. In his postgame media conference, Stefanski was asked about the meeting but characterized it as routine. Perhaps some of it was, but Mayfield had been critical of both the play-calling and in-game adjustments before he and the team agreed that it would be best for all concerned if he sat out the closer with Cincinnati.

Though his quality backup, Case Keenum, pushed his season subbing record to 2-0, Keenum’s viability as a 2022 fulltime alternative to Mayfield took a hit. He committed some the same mistakes of which Mayfield too often has been guilty. He fumbled and the Bengals scooped and scored. He threw an interception into the end zone. He missed an open David Njoku on the two-yard line. He did, however, find a way to win, something the battered Mayfield (shoulder, foot, knee, groin, and who knows what else) has been unable to do. Keenum recently called it a “small miracle” that Mayfield was able to play at all. So Mayfield was there to support Keenum and seemed to relish it.

Players know what players give. All of Browns Nation knows what for more than 50 years, as player and then member of the Browns radio broadcast team, Doug Dieken gave them. They showed him one last time that they knew this when the game was halted and, from the radio booth, Jim Donovan, Dieken’s play-by-play partner, announced that it would henceforth be known as the Doug Dieken Radio Booth.

The honor may be a different sort of payoff for work well done than a $250,000 contract incentive that pass rusher Clowney cashed in by twice sacking Burrow’s backup Brandon Allen. That pushed his sack total to nine, the magic number to reach a total of $750,000. That not only is good piece work if a man can get it but also should push General Manager Andrew Berry to prioritize resigning Clowney, a free-agent nomad.

Likewise, D’Ernest Johnson both promoted his own cause as a restricted free agent and/or provided suitors with another impressive audition tape. The undrafted Johnson may be the best No. 3 back—behind Nick Chubb, who with 58 yards on 9 carries for 1,259 yards finished second in the NFL, and injured Kareem Hunt—on any team but especially on one that supposedly likes to run. For the second time this season, Johnson gained more than 100 yards, looking as dominant as he had in a victory over Denver that Keenum started. He carried 25 times for 123 yards, including a 4-yard TD.

The Browns may not have made life easier for themselves next season by winning. But at the end of this long, losing plod, they reminded everyone that they can be winners.