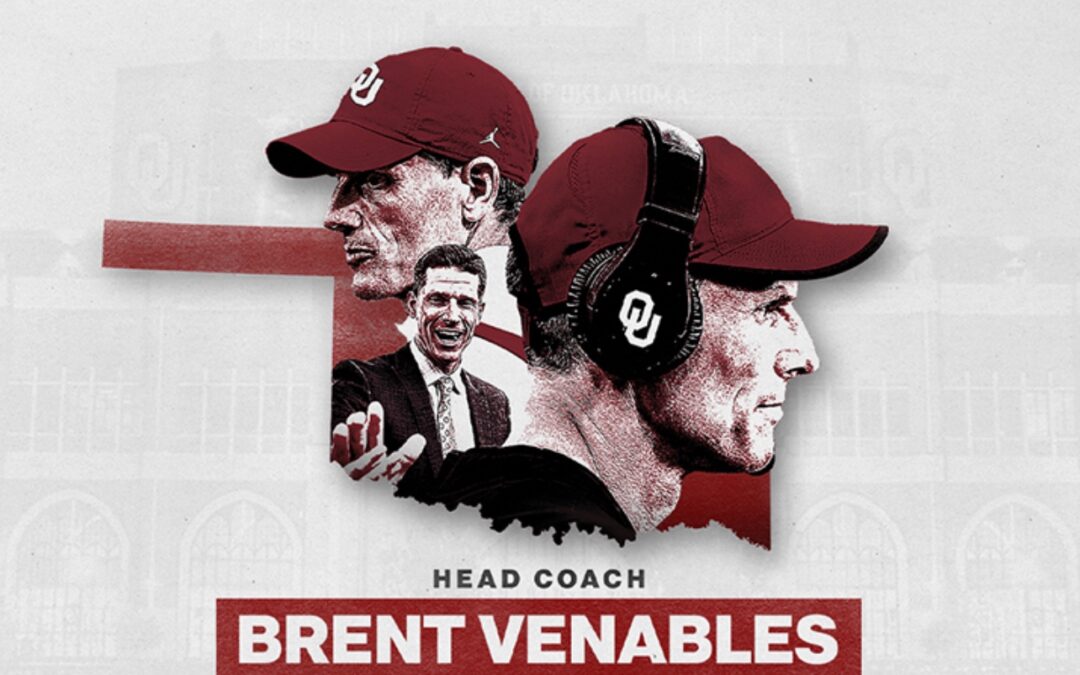 When it comes to dream jobs, patience and quiet persistence may be required. These do not grow on trees, especially in a plains-and-prairie state such as Oklahoma, where trees can be scarce. Striving for the dream job can feel like a long-haul nightmare.

The perfect position cannot be coaxed, charmed, or even coached onto the runway of personal opportunity. A person manages life and career as best he can, maybe even trying to manipulate it where possible. But in the end, this often fails. He manipulates, the person with all the cards, the one doing the hiring, laughs or silently smirks.

The intersection of right time, right place, right appeal cannot be programmed as if there is a GPS that will take a person right to where he wants to go. More often, he feels as if trapped on an endless roundabout or traffic circle, going nowhere—very, very slowly.

For years, Brent Venables, who coaches football better than most, waited. He had a great job—Clemson defensive coordinator—and two national championships at Clemson, after one at OU, plus lesser baubles, give proof. People noticed. He had job offers to take the big step to the big office and the big money. He stepped back from so many possibilities, it looked as if he might never find the right one to be head coach.

But that was just it: Brent Venables did not want to be just any head coach. He knew where he wanted to be and all about the job. He had been there, standing for 13 seasons at the right hand of Bob Stoops as they resurrected Oklahoma football. There had been only one opportunity to succeed Stoops and even before he may have known about it, it was gone—filled by the Sooners’ young, successful offensive coordinator.

Lincoln Riley was only 33 when Stoops, Director of Athletics Joe Castiglione, and David Boren, then university president, handed him the keys to the kingdom, the kind of Gold Standard college football program from which coaches do not walk away voluntarily.

And yet, Riley did. For seven years—five as head coach—he professed undying love for Oklahoma and a Big 12 dynasty that Stoops and he had renewed. He had the best quarterback in college football, Baker Mayfield, whom he had helped to mold, and another, as good or better, waiting in the wings. He made Oklahoma Quarterback U. Then, on Sunday, November 29, he walked out the door for what he must have believed is a better opportunity at the University of Southern California. A week later, Venables happily agreed to come home, because he knew something Riley may just find out:

“There’s only one OU,” Venables told a cheering and reassured Oklahoma crowd.

Venables may or may not succeed—others who loved Oklahoma and the Sooners have not managed to do so when handed this opportunity—but this time Sooner nation will know there is no sleight of tongue going on. Though I’ve long again left my state and remain a Sooner expatriate, Kansan-by-birth, Oklahoman-by-choice Venables will, I think, not love and leave the place and people that have made his dream come true.

The Oklahoma media reported that hundreds, or perhaps thousands, of people greeted Venables at Max Westheimer Airport in Norman, Oklahoma, on a cold Sunday night when the plane bringing home Venables—nearly 51 now—landed. The Pride of Oklahoma band, Sooner cheerleaders and mascots, and even the Sooner Schooner with the ponies—Boomer and Sooner—that draw it might have been able to feel the warmth coming from the 23rd OU head football coach, as he told everyone in the throng:

“You’re on fire tonight. Thank you and keep being you. You make this place so special. (Other) people have no idea of the love and appreciation that y’all have for your program. This is one of the richest, storied programs in the history of college football.

“But, it’s not just all the success. It’s the true passion and love that y’all have in this state for your team. We separate ourselves. There’s a lot of good football programs out there—but there’s only one OU. To have the opportunity . . . the first time to lead a program and it’s Oklahoma? Are you kidding me? It doesn’t get any better than this.”

Might he have had this opportunity sooner had he remained at Oklahoma, where he had coached linebackers and been defensive coordinator and Bob Stoops’ assistant head coach? That may be an impossible hypothetical question to answer, but when Stoops brought back to OU his brother Mike after he been fired as head coach at Arizona, the dynamics changed. Though as close as brothers since their coaching days with the legendary Bill Snyder at Kansas State University, Venables is not a Stoops. He moved to Clemson in 2012, where as singular defensive coordinator his success has been remarkable.

That is who came home to Norman to attempt to do what other successful Oklahoma assistant coaches or former players, from Gomer Jones to Gary Gibbs to John Blake, failed accomplish when they became head coach. A deep Oklahoma connection does not guarantee the final measure of success. For all his victories, Lincoln Riley demonstrated that—going 0-3 in College Football Playoff semifinals as head coach and also losing as offensive coordinator to Clemson and Dabo Sweeney and Venables. This year, the 10-2 Sooners didn’t even reach the Big 12 Championship game, losing to Oklahoma State.

To succeed, Venables must find an offensive mind to complement his defensive genius. Don’t be surprised if it is someone with an Oklahoma background. Perhaps someone such as Jeff Lebby, offensive coordinator/quarterbacks coach at the University of Mississippi. An all-state player for his father, Mike Lebby, Jeff got an early start on coaching after injury ended his playing career at Oklahoma. He spent four years (2002-2006) as a Sooner student-assistant coach, when Venables was coordinating the defense. Who knows, Lebby may love the people and the place as much as Venables.