Still a Soft Spot in My Heart for Clark Hardware 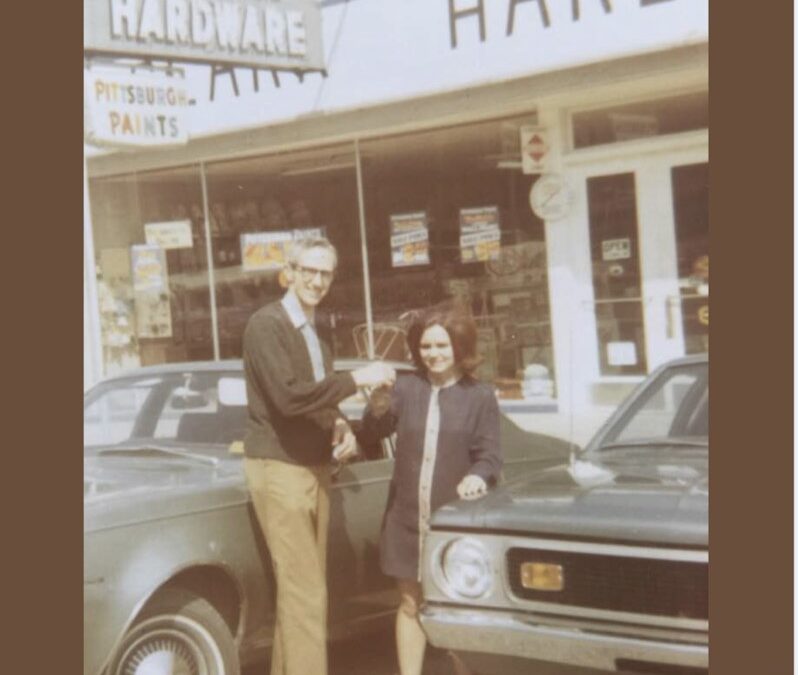 A couple of blocks from the downtown hub of my life, the one that occupied my late afternoons in the 1950s—a newspaper, of course—stood a different sort of business fixture, symbol of a small-town ripe with economic prosperity and rich with possibilities.

None of us realized then that Clark Hardware, a home-owned, independent store in those long-ago days before the Home Depot, Lowes, and other chains linked by their monotonous uniformity, would outlast even itself and gain a certain fame all its own.

After it had finally closed, outlasting so many businesses that could not begin to survive the incursion of Wal-Mart into small towns such as Nowata, Oklahoma, Clark Hardware got to take its Hollywood star-turn. The only thing that would have been better is if owners Richard and Juanita Clark had been there to see it, perhaps even starring in the very setting they had made the nuts and bolts of what held our community together.

Clark Hardware supplanted even the Nowata Daily Star in my memory when it became a principal setting inPossums, a low-profile, low-budget, but sweet 1998 movie that still can be found on popular streaming services. Ostensibly a fable about a high school football team so bad that it not only has not won in decades but it also has not scored. In essence, it is the story of coming of age in Nowata’s, safe, wonderful places where old men sit on a bench in front of the hardware store and where really good people come and go and try their darnedest to put back on track whatever has gone off.

Though the scriptwriter who grew up in Oklahoma had modeled the hardware store after one he had worked in in another small town, he changed the name to fit the sign on the façade and turned Richard Clark into Will, a sports broadcaster who had returned home to run the store his father had started and to dabble in broadcasting Possum games. (My book Football, Fast Friends, and Small Towns: A Memoir Straight from a Broken Oklahoma Heart includes an essay/chapter about Possums, Nowata, and the Clark Hardware to which Richard and Juanita returned in 1956 following their honeymoon.)

Richard ran the store as perhaps few others could, and Juanita taught United States History, first in the high school and later in the junior high. She influenced the lives of hundreds of students over a long career that included guiding a program for gifted students, one of whom, Sherry Wilson, continues today to carry that torch. Juanita even found time, after Clark Hardware’s longtime bookkeeper George Gannaway died, to assume those duties.

Besides its ordinary and expected items, Clark Hardware was a browser’s paradise. It was a candy store for adults. Unlike today’s predictable inventory at the big box stores that seem to come from computers on auto load, Clark’s had a feel of having been curated by an individualist. A smart one. That was Richard Clark. I would have loved to work for, and, more important, learn from a man with a mind like Mr. Clark. No chance.

Oh, Mr. Clark, based on what I know and observed and have learned from Juanita, might have given me shot. But I was too insecure to ask and knew that I had not shown much interest in listening to my Daddy who handled tools as deftly as he did a scalpel in his animal hospital. Tools in my hands were anathema to me. I knew one end of a claw hammer from another but usually succeeded in pounding a finger rather than the nail. Instead, I settled for a chance to work at the Price IGA, the second-best grocery story in a two grocery-store town. I was grateful to have a job, although what I learned—plucking rotten potatoes from 50- or 100-pound sacks before the rot spread and I puked from the smell—seemed to fall short of what Mr. Clark’s son George got from his store.

“I find that George learned so much from the time he spent working at the hardware store,” Juanita agreed in an email. “It is useful to him today. He tackled a screw [with] a gun yesterday because of some of that knowledge. It saves him money because he knows when something is repairable, while others just throw it away and buy something new.”

I am the latter. Mama warned me. She said I would have to make a lot of money to pay others to do what I should know how to do. And she was right. Problem is, I never made a lot of money and unlike George I was not so good with numbers that I have done  inventory at the hardware store at age 3. He wrote down the number of items in stock and left it on the shelf to be recorded. “Taking inventory,” Juanita wrote, “was a big chore before you could use a scanner.” But George made it easier. He is now a USAA insurance executive in San Antonio with computer expertise—smart like his parents.

They drove to Kansas City in a snowstorm to become the first to sign up to be part of a worldwide buying group through one of their wholesalers. This gave Clark Hardware a purchasing advantage and access to advertising mailers. “It delighted some of our customers,” Juanita wrote, “when they could come in and show Richard he had beaten Wal-Mart’s prices. Loyal customers like that are what kept us in business.”

As other businesses that carried similar items to Clark Hardware failed, Richard Clark was winning a car for sales of Sterling Faucet Company products and was able to give away cars in other contests. Meanwhile, Juanita Clark became the first woman to serve on the Nowata City Commission and also the town’s first female mayor which she pooh-poohs because of the weak mayor-strong city manager form of government. True, mayor is ceremonial but there is not denying the Clarks were the heartbeat of Nowata.

After 48 years they left a monument that would later became a Hollywood small-town symbol. They retired to San Antonio to be close to George, his wife, and their two grandchildren. In the process the Clarks learned that Richard had colon cancer. He died within six months in San Antonio. Though Juanita misses him every day, she carries on, still teaching others—like me—who come within the sphere of her influence. She is 88.

I worry about her as I worried about Mama before she died in 1988 from kidney disease. Juanita reminds me of Mama. Maybe it is a Coffeyville, Kansas, thing. They both grew up there—years apart—and became Nowata cornerstones. They remain mine.