England Loses a Championship and a Piece of Its Soul 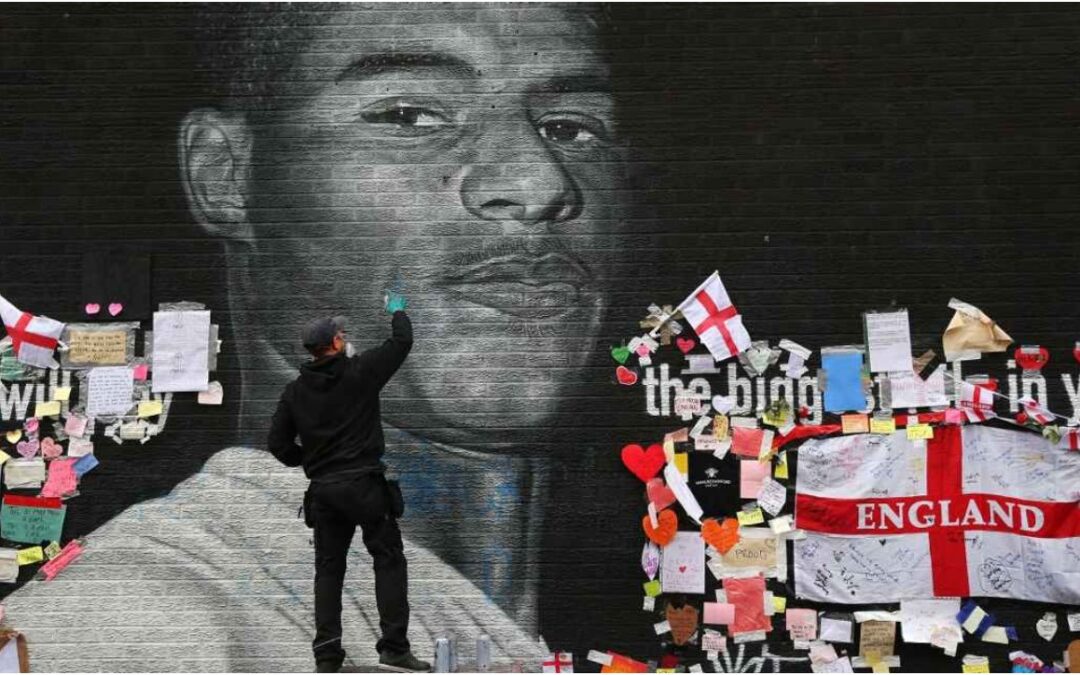 Racist hooligans on social media and in the streets of England turned The Beautiful Game’s naming failures into pimples compared to their infected-boils-of-a-reaction to three missed penalty-shootout tries that decided the delayed Euro 2020 Championship.

In a pre-match post I castigated the various football organizations for not better defining the games they rule—Association Football (soccer), Rugby, and American Football—with names that could distinguish them from one another. But when the lowest of the low went on the attack against three young Black English players—Marcus Rashford, 23, Jadon Sancho, 21, and Bukayo Saka, 19—that assault exposed flawed naming conventions for the comparatively minor shortcoming it is.

As in the United States, where we have yet to find a way to address and repent our own systemic racism, the some of the worst of prejudice flows from the top of the political food chain right down to the verbal and physical brutes in the gutter at the bottom of it. British Prime Minister Boris Johnson, doing his wild haired/eyed imitation of former president Donald Trump, gave license to such behavior before the tournament when he winked at the booing of the English team when its players knelt before games in protest of racism and other social injustices that people of color must endure.

It was a dog whistle if ever there was one. A person of color could see coming what arrived in the wake of failed penalty tries that allowed Italy to reclaim its stature as a champion. USA TODAY columnist Mike Freeman wrote that “a number of Black friends, and Black people on Twitter, all had the same reaction: Those three men are going to face incredible racial abuse.” They were right. England unleashed its competitive failures on a whipping boy familiar on both sides of the pond.

Even those of us who are not Black could predict this. As one penalty try hit the bottom of the left post and Italy goalkeeper Gianluigi Donnarumma got a mitts on the other two the only words I had—oh, no—came not from disappointment for England but for all of us. This was not a moment to pretend that we did not expect such a response.

England, oldest national team in football with a history going back to 1872, has won only one major championship—a 4-2 victory over West Germany in 1966. With each lost opportunity the cloud seems to descend lower and lower until the darkness envelops the sensibilities and the worst of who we are rises and explodes into public view.

British police opened investigations into “offensive and racist” posts published on social media that coach Gareth Southgate condemned as “unforgiveable” and demanded that social media companies ferret out the racist weasels who had perpetrated the abuse. It was not unlike what occurred in American football when San Francisco quarterback Colin Kaepernick, campaigning against racial and social injustice, began kneeling on the sideline. The English side did it more overtly smack dab in the middle of the pitch.

While the booing this evoked may not have been enough to prompt Boris Johnson’s condemnation, he was quick to walk back his prior failure after the reaction against the Black players. He allowed as how “those responsible for this appalling abuse should be ashamed of themselves,” yet he did not seem to be stepping to the front of that line.

Keir Starmer, leader of the Labour Party that opposes Johnson, called out the prime minister for not previously doing the same to the British boo birds. Johnson’s spokesman explained the prime minister had been “more focused on action rather than gestures.” Even then, it had been the English side that had been admirably activist, especially Rashford who had been honored with a mural in Manchester where he plays. His work included pressing the government to provide free lunches for people during the pandemic—and it did not matter what color a lunch eater happened to be.

“The problem is,” Mike Freeman suggested, “racism is both embedded in the UK culture (and America’s), while simultaneously significant swaths of the country don’t believe systemic racism exists. Hell, in the U.S., some of us don’t even want to teach the history of racism.”

History turned into current event when Rashford’s mural was defaced in Manchester. Street-artist Akse immediately went to work repairing the vandalism to the mural. Southgate, England’s coach, might relate to what American writer William Faulkner once famously wrote: “The past is never dead. It’s not even past.” (Requiem for a Nun) Southgate has drawn criticism for inserting Rashford and Sancho to take penalties while star Raheem Sterling was sidelined during the shootout.

Southgate has endured more than his share of derision over the years for missing a decisive penalty kick for England in the 1966 semifinal loss to Germany. As Southgate managed the shootout it would seem he might have thought about not only victory but the personal satisfaction—redemption, even—that circumstances were offering. Might his failure back then help Southgate steer England to success in the here and now?

Past failure may be a part of future success, but having known the former is not necessarily a sure-and-steady bridge to the latter; to the other side, as it were. This could be especially true when hatred mortars bricks into the wall of nerves that already can block the way to success. Teenage Bukayo Saka, whom Southgate wrapped in his arms to comfort after the match, had not only never taken the critical fifth-and-final kick to decide a European championship for which an entire nation longed but he also had not even tried a penalty kick for his Arsenal club side.

When he spoke about his decision, Southgate explained: “I chose the penalty takers based on what we’ve done in training and nobody is on their own. We’ve won together as a team and it’s absolutely on all of us in terms of not being able to win the game tonight. But, in terms of penalties, that’s my call and totally rests with me.”

So it does. But can Southgate’s acceptance of this responsibility and his love and that of other righteous supporters mitigate the racial hatred these young Black men now know?